Singapore
On the occasion of the Singapore HeritageFest 2015, the historical monuments of Telok Ayer Street - including Telok Ayer Chinese Methodist Church, Al-Abrar Mosque, Thian Hock Keng and Yu Huang Gong temples and the Nagore Dargah Indian-Muslim Heritage Centre - have been temporarily lit up to celebrate this popular event in full colours. A wide range of cultural programmes and performances have been held from mid April to mid May along the oldest street of Singapore, reviving the history and traditions of this multicultural island in remembrance of the forefathers who sought a new life in Singapore.

Formerly a major arrival point for sea travelers, Telok Ayer Street, also known as "Bay Water Street”, used to house manifold places of worship built by early immigrants of different communities to express their gratitude for a safe sea passage. Over the centuries, these sandy shores evolved into an urban precinct now encompassing six National Monuments. In May this year, some of these religious monuments have been lit up to celebrate Telok Ayer Street’s heritage. Special lighting installations, which have emphasized the historical features of the buildings while recreating the former shoreline, could be admired in this festivity period during a leisurely walk.
Year
2015
Credits
Dealer: TFO Private Limited /AiXZ International
Programming and start up: AiXZ International
Lighting designer
Roberto Corradini & Marco Palandella
Pictures
Courtesy of Singapore National Heritage Board 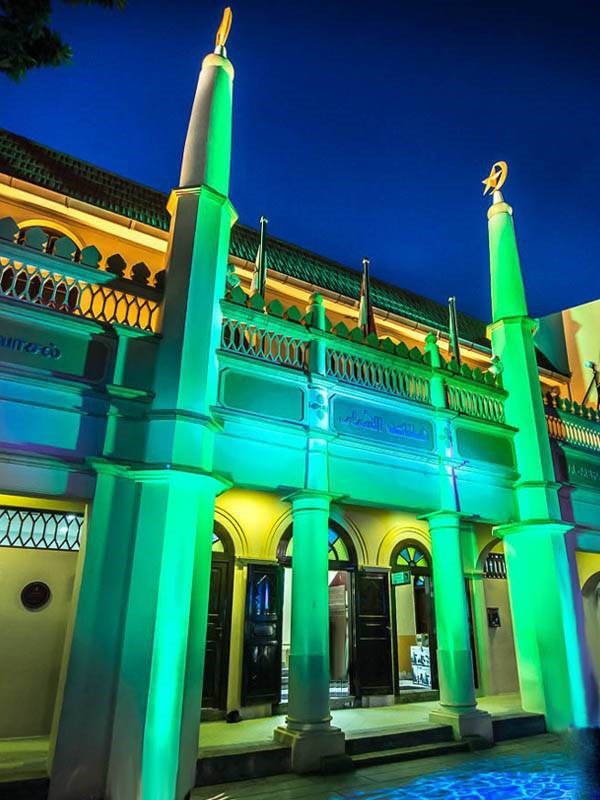 Among the National Monuments that have been lit up on this occasion, Al-Abrar Mosque, which was established in 1827 in the historic Chinatown area by Chulia immigrants - Tamil Muslims coming from south India - stands out for its impressive layout. Declared a National Monument in 1974, Al-Abrar Mosque has a neat and linear architectural design. The central bay is framed by two high octagonal minarets topped by a crescent moon and star, an internationally recognized symbol of Islam. In between, two smaller minarets rise from circular columns. Adorned with an Islamic merlon cresting, the façade is completed by an eye-catching vent style balustrade.

Conceptualized by the Italian lighting designers Marco Palandella and Roberto Corradini, fine-tuned by Roberto Baggio of the company TFO Private Limited and GRIVEN’s lighting design department, the illumination scheme of the mosque aims to enhance the essence of the building and of its historical context. The lighting concept is based on three different levels, setting the main façade to the forefront with the help of a well diffused wall washed light, while the upper floor with its arched windows and the lower entrance doors shine in contrasting, softer colours, dislocated on different perspective lines. According to the lighting designers’ specs, GRIVEN LED wall washers were installed on the mosque’s façade and in front of it in order to obtain the desired layout. A couple of Emerald in RGBW configuration with elliptical and elliptical wide optics have been located on the trees in front of the mosque to wall wash it with lively shades. An array of Jade 9 in RGB and warm white colour temperature either with spot, narrow and elliptical optics has been installed right on the upper and lower façade of the building to create a pleasant accent lighting and to enhance the crescent moon and star symbols. Installation and relevant on-site programming have been carried out with the utmost competence by GRIVEN’s authorized dealer for Singapore, the company AiXZ International. 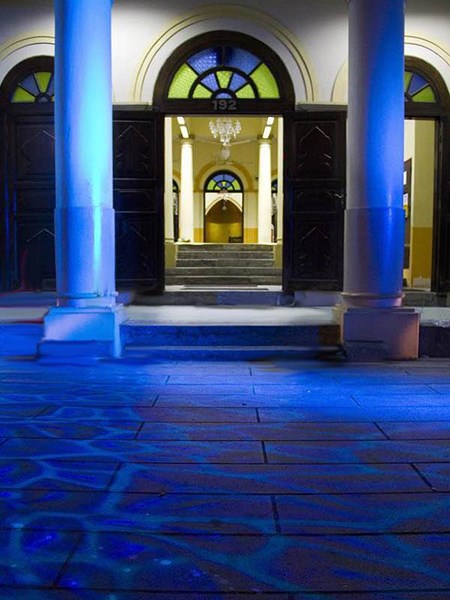 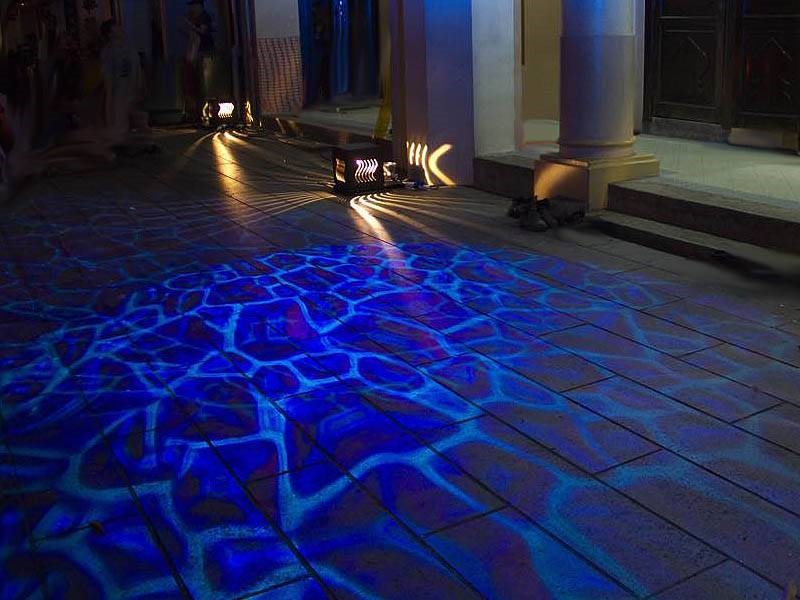 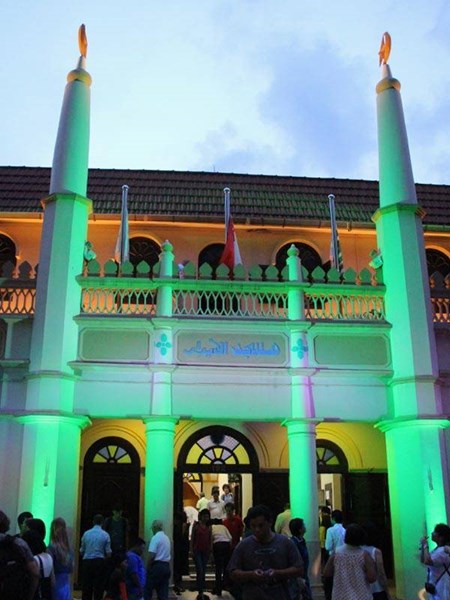 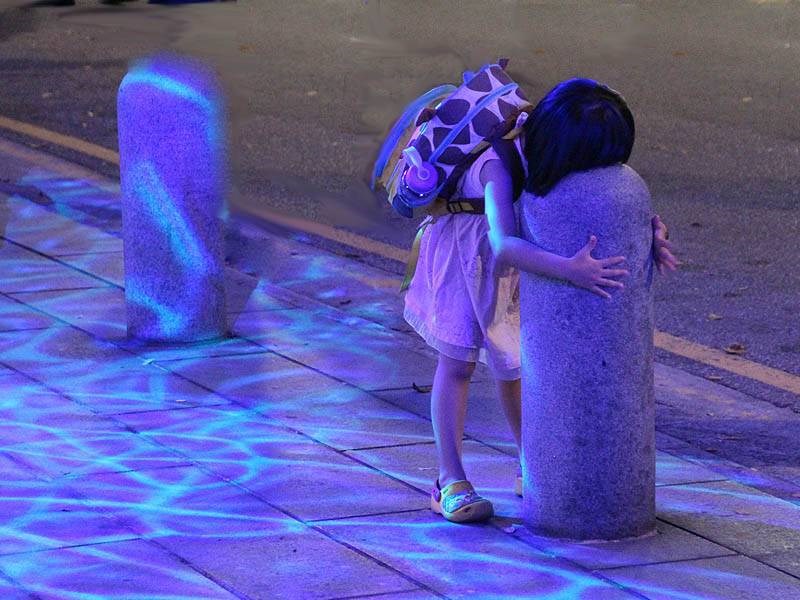 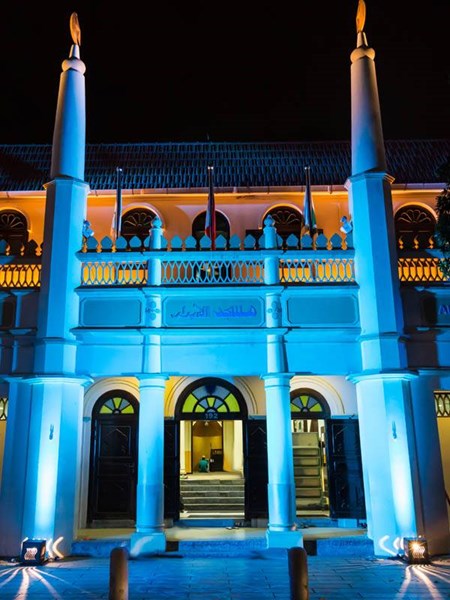 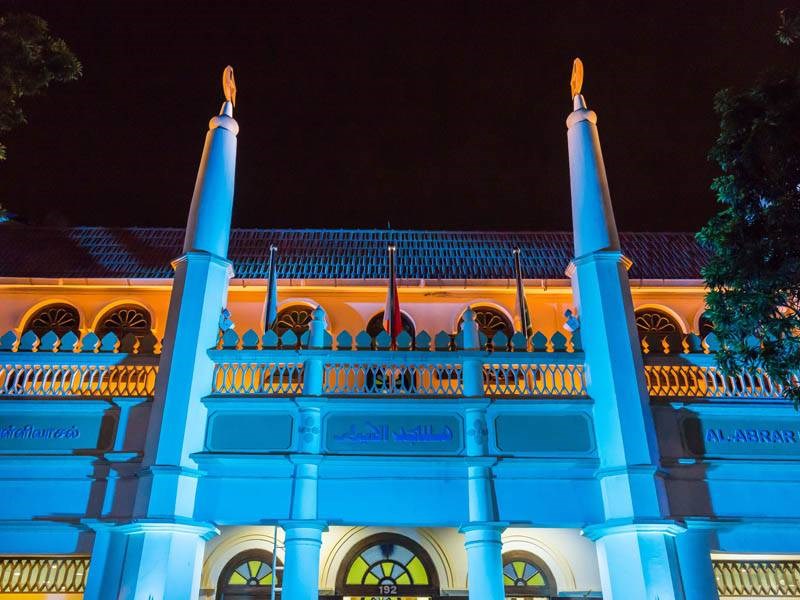 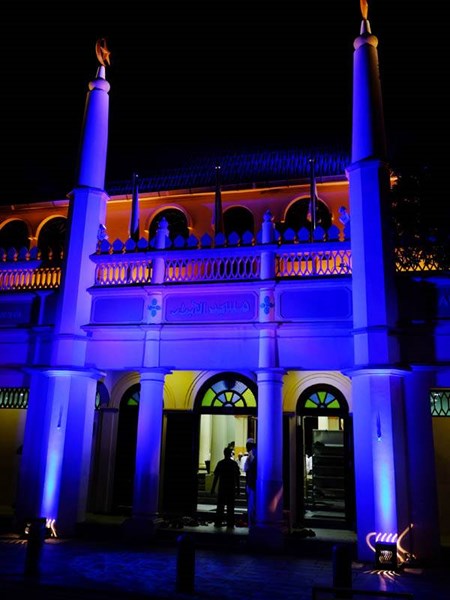 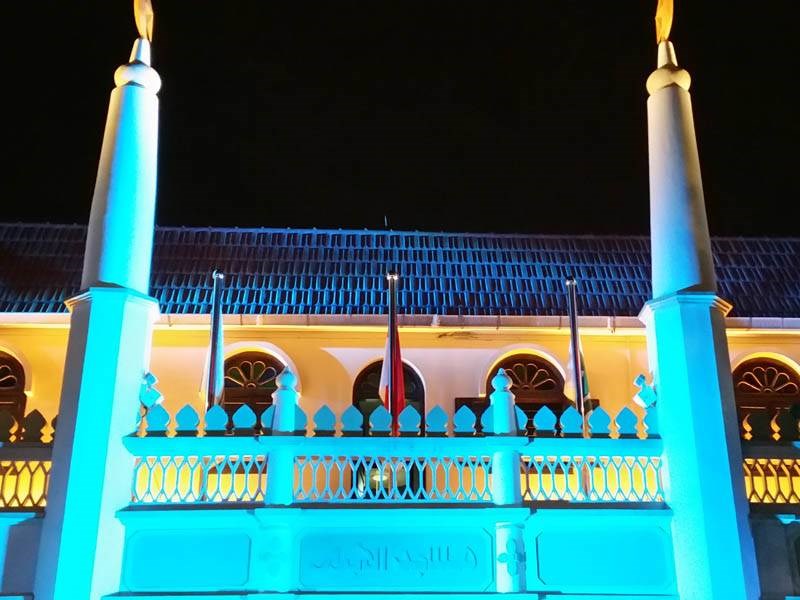 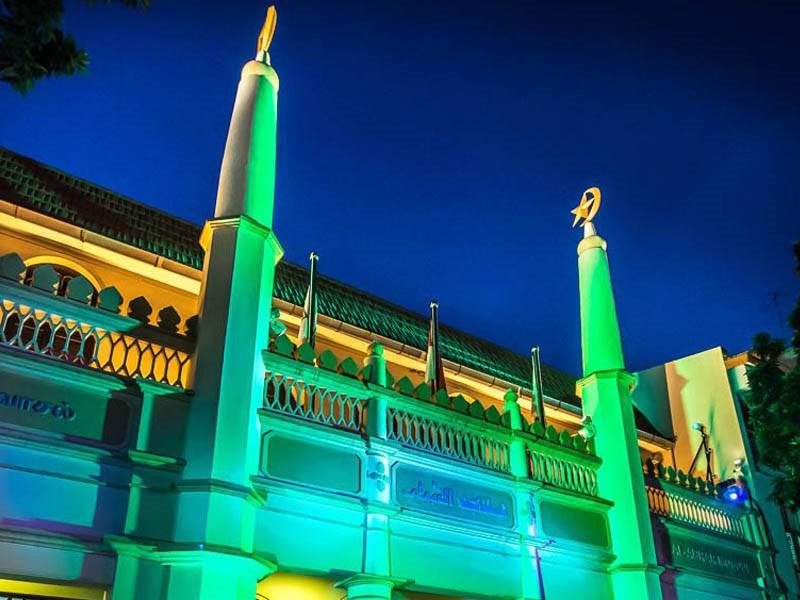 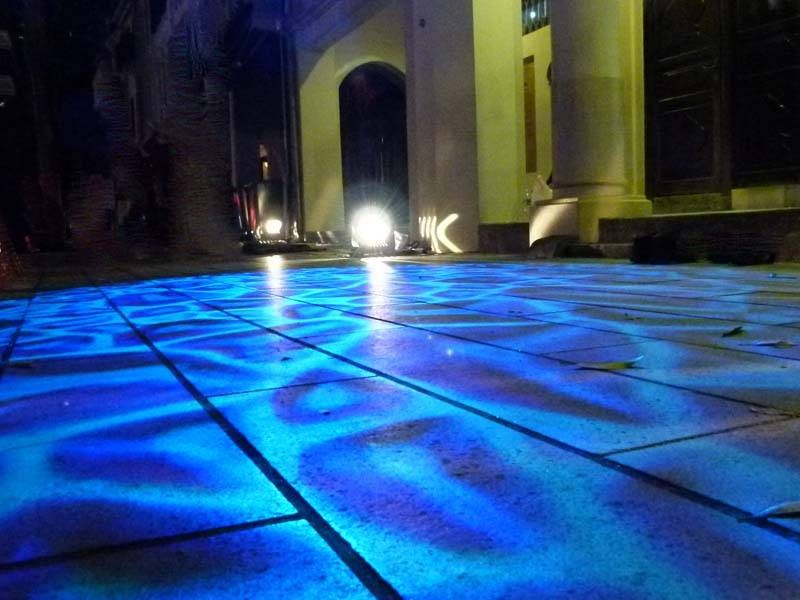 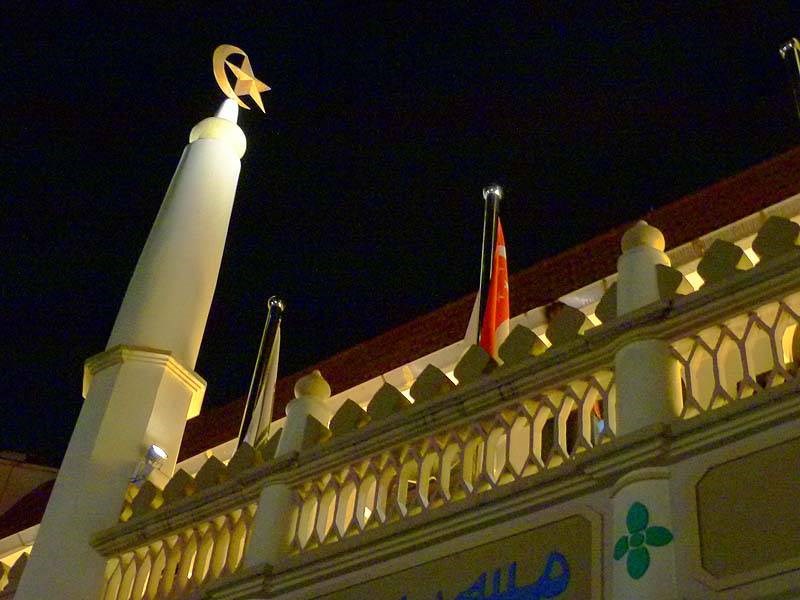 Highlight of the installation is a moving water projection right in front of the building obtained through the usage of 2 units of GOBOLED 80 D mounted at the two sides of the balustrade for a neat gobo projection. A reminder of the old shoreline once located at the foots of the monument, this refracted image at the doorstep of the mosque reflects the maritime heritage of the area with its past religious and commercial traditions.

The IP65 rated GoboLED 80 D projects a bright and accurate rendition of graphic designs or logos in outdoor and indoor locations with the help of a dichroic or metal gobo. GoboLED 80 features greatly performing linear 0% to 100% electronic dimmer, strobe (25 FPS max) and black-out facilities. With totally smooth and silent gobo indexation, 4 gobo rotation speeds in both directions can be selected in automatic mode, while, in DMX mode, clockwise and anti-clockwise rotation speeds are growing and adjustable from 0 to 100%. The ventilation system, acting only when necessary, is also distinguished by a totally noiseless operation, whereas manual zoom and focus functions combine with more in-built beam angle tuning options to provide with maximum design creativity, dynamism and flexibility the most demanding design and application requirements.

Despite the manifold astonishing attractions of Singapore, the old Telok Ayer Street has been beautifully revived and brought back to its past glory days, a true eye-opener to the cultural history of that humble road brimming with historical reminiscences. 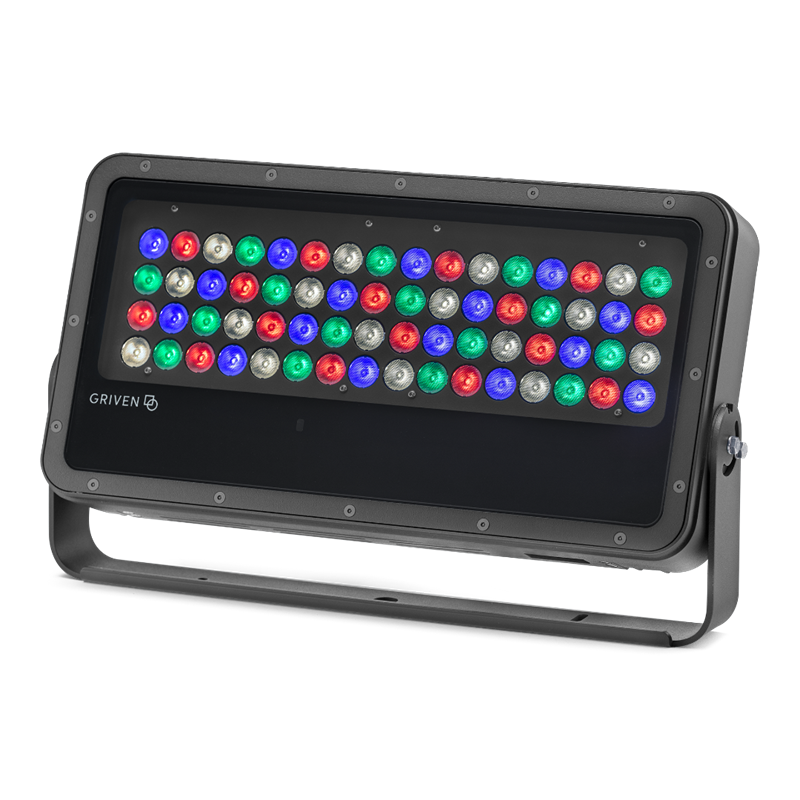 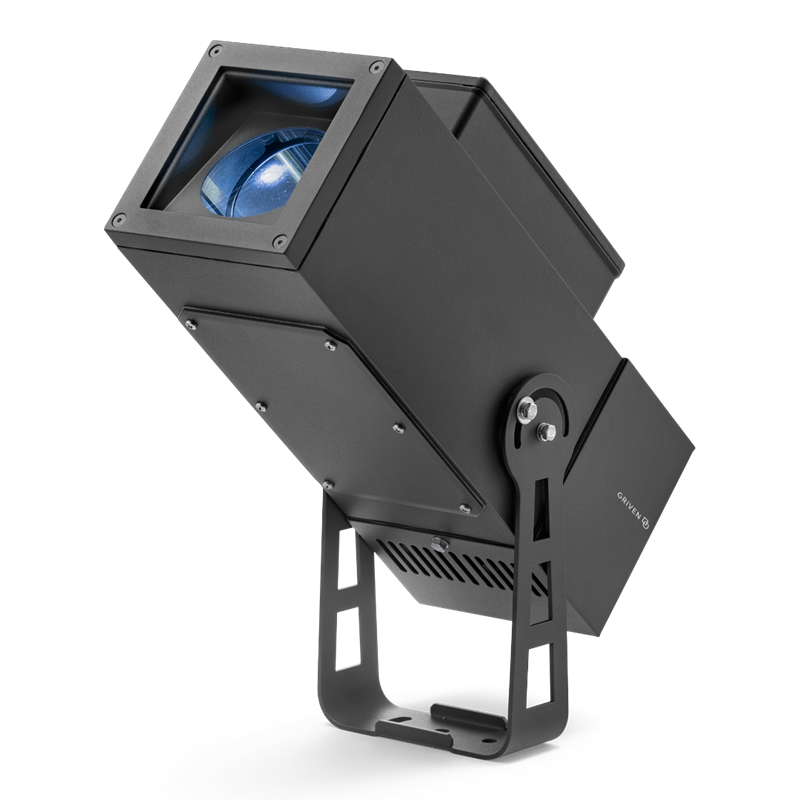