Russia
Sparkles of the past glory days are so far to be found at Sochi Olympic Park, where wonderful memories of the lately concluded Olympics 2014 are still lingering in the air. The impressive illumination system of this area is a tangible evidence of the huge work done to transform a simple coastal venue in the most spectacular theme park in the world. GRIVEN is proud to have contributed to light up, with the help of over 1700 LED lighting fixtures - specified and installed by the lighting and engineering company Svetoservis-Kuban Ltd. and supplied by GRIVEN’s exclusive distributor for Russia, DSL Company - two significant buildings within the Olympic Park area: the imposing Hercules hotel complex and the Main Media Centre.

Shaped like a fairy tale castle and named after a legendary Greek demigod, Hercules hotel complex is located within walking distance from the first Russian theme park and recalls the joyful and fabulous atmosphere of a Walt Disney amusement village. Along with its 278 rooms, it also accommodates shops, bars and restaurants, beside a swimming pool and a night club, and is fully equipped to host meetings, seminars, conferences, live concerts, parties and weddings.
Year
2014
Lighting design
Svetoservis-Kuban Ltd
Product specification and installation
Svetoservis-Kuban Ltd
Distributor
DSL Ltd
Pictures
Ilya Varlamov
The building consists of two main parts, whose major features, two differently shaped and sized towers symbolizing a king and a queen, stick out from the complex outline completely surrounded by a group of minor turrets, altogether delivering a medieval manor-house resemblance to the whole structure. The appointed architects drew inspiration from a century-old tale belonging to the Black Sea cultural tradition while embodying in the castle outlines a king and a queen holding hands and proudly looking down on their crown princes and princesses, cheerfully surrounding them. The many decorative elements of the hotel façades combine features of different architectural styles, revealing great abundance of narrow arched windows, small ledges, elegant towers and turrets topped by differently shaped domes, aimed at delivering an ancient aura to the brand new construction.

From a technical point of view, the Hercules Hotel complex has required an impressive number of lighting fixtures to achieve the well known breathtaking final result: 838 units of Jade, 105 Zaphir, 345 Micro-Clip MK2 and 4 Imperial 4000, for a total amount of almost 1300 units, have been installed directly on to the hotel walls in order to enhance its architectural details with a dynamic accent lighting scheme. Essential prerequisite was the use of RGBW and warm white, high efficiency, low power consumption LED fixtures equipped with a compact, low-weight chassis and a DXM control system. 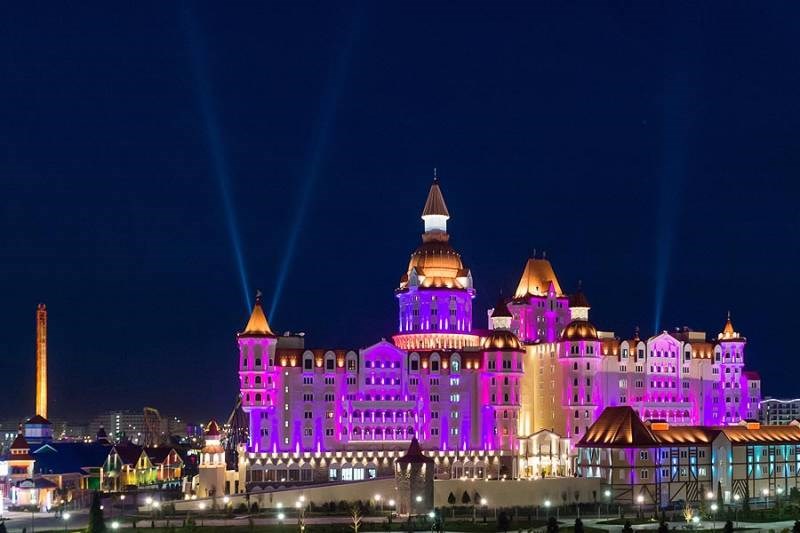 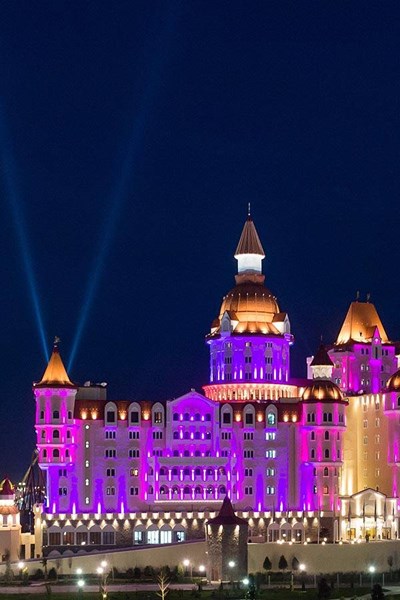 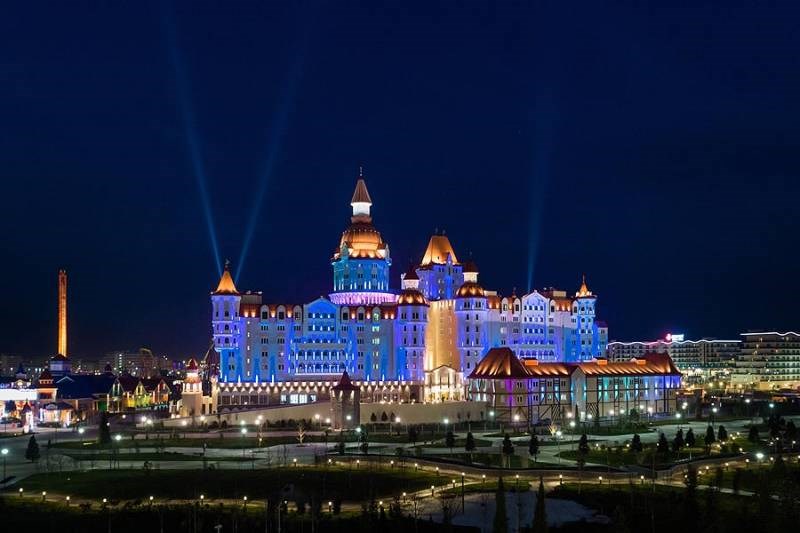 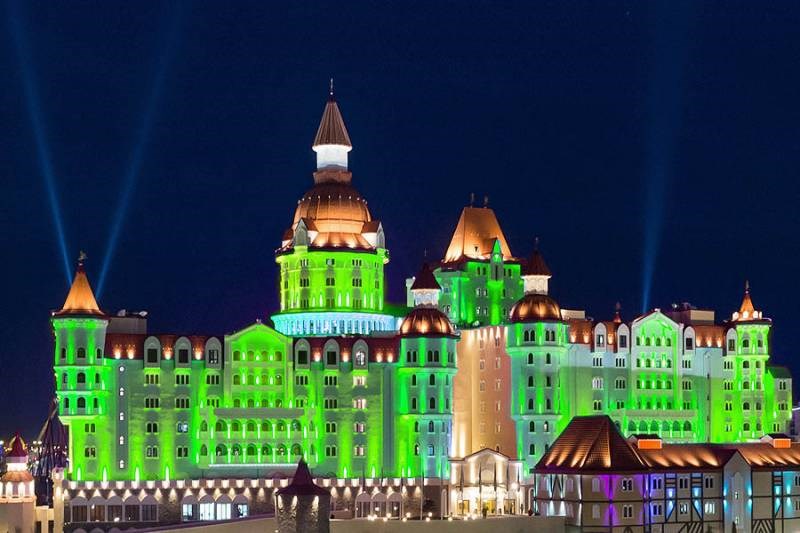 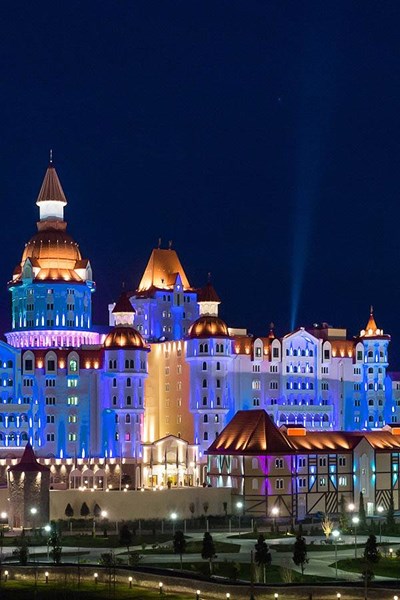 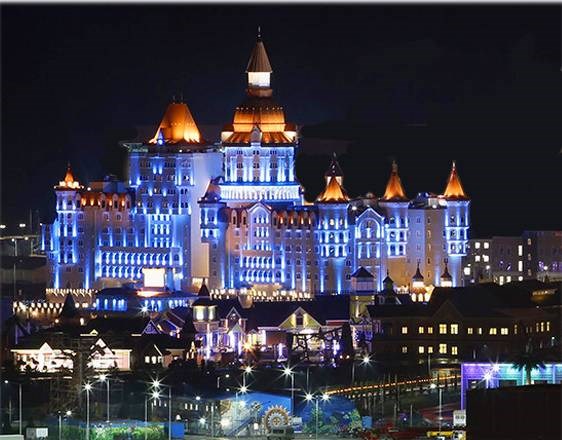 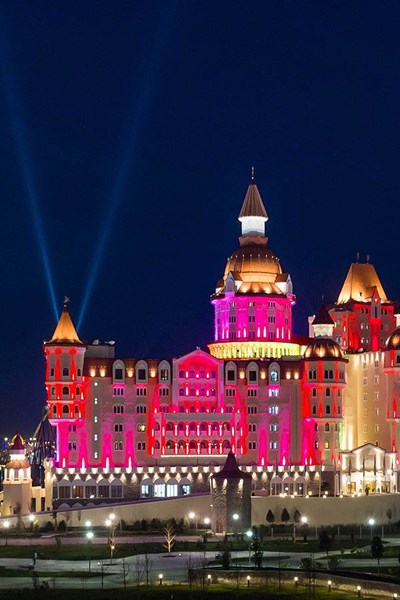 375 units of Jade 9 RGB with narrow optics have been chosen to stress with fine touches of coloured light the architectural features of this fabulous mansion, enhancing the arched windows, the turrets and towers located at different heights, while 153 units of Jade 9 RGB with wide optics have been positioned on the lower level to deliver a wider colour distribution on the walls from below. Moreover, 310 units of JADE 9 in warm white have been used to light up the domes of the turrets and the roofs of the side buildings with an amber shade. JADE 9 is a rounded spotlight which houses nine high power RGB or white LEDs, as well as in-built electronics and power supply unit in a compact chassis. The wide choice of exchangeable optics groups, ranging from spot aperture beams to elliptical wide distribution, and the full pan and tilt orientation adjustment further enhance JADE 9 maximum flexibility for any surface mount application purpose.

345 units of the ultra compact spotlight fixture Micro-Clip MK2 in warm white have been used to highlight the battlements and crenellations located along the perimeter of the castle, as a very precise spot of light was required to enhance with extreme definition this architectural detail. Moreover, 105 units of Zaphir in both RGBW and warm white set-ups have been used to stress the domes, roofs and larger walls of the castle. 4 searchlights Imperial 4000 complete the massive dynamic lighting scheme with powerful narrow beams reaching up to the sky.
This innovative dynamic lighting concept successfully delivers to Hercules Hotel complex a magic allure making it look like a "toy town”, while creating an atmosphere of carefree childhood and fairy tales. 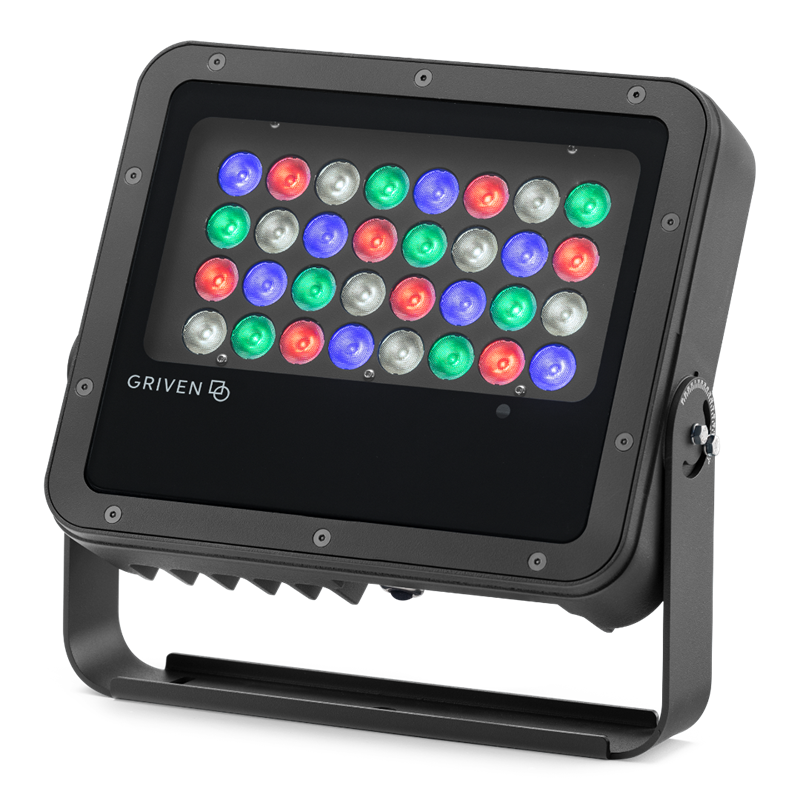 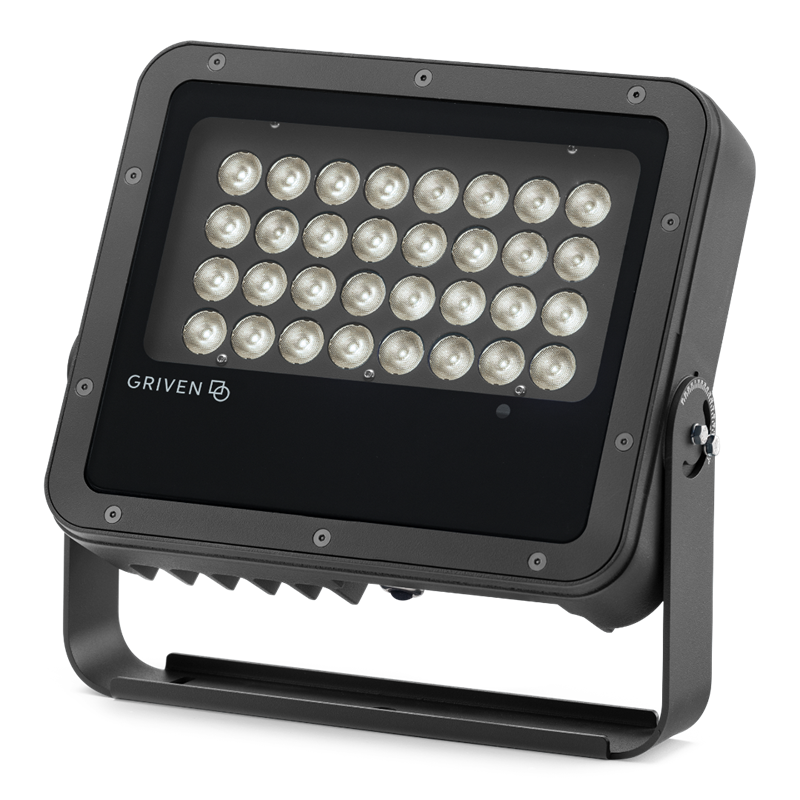 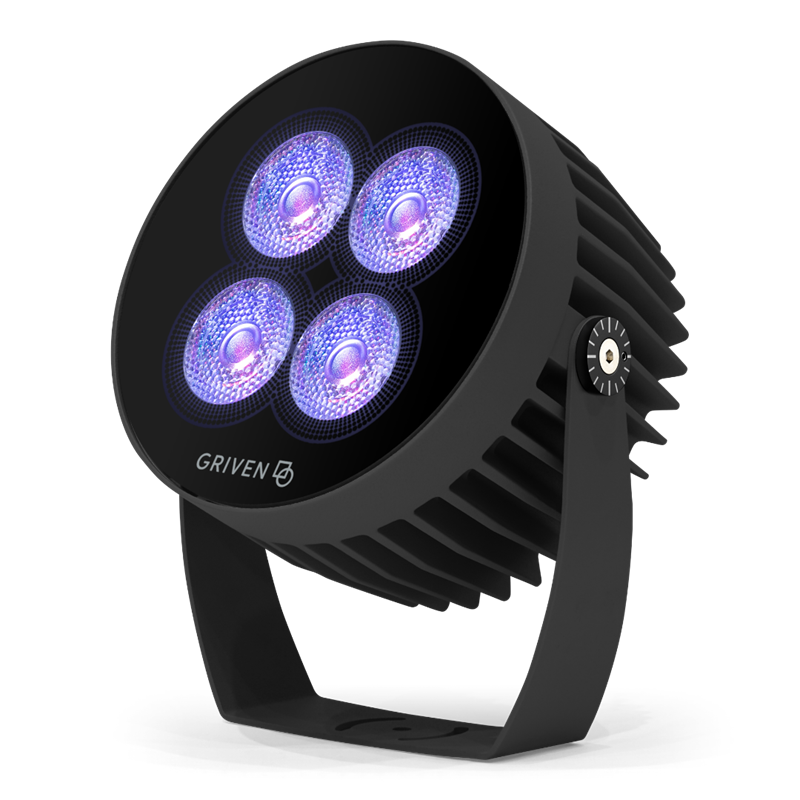 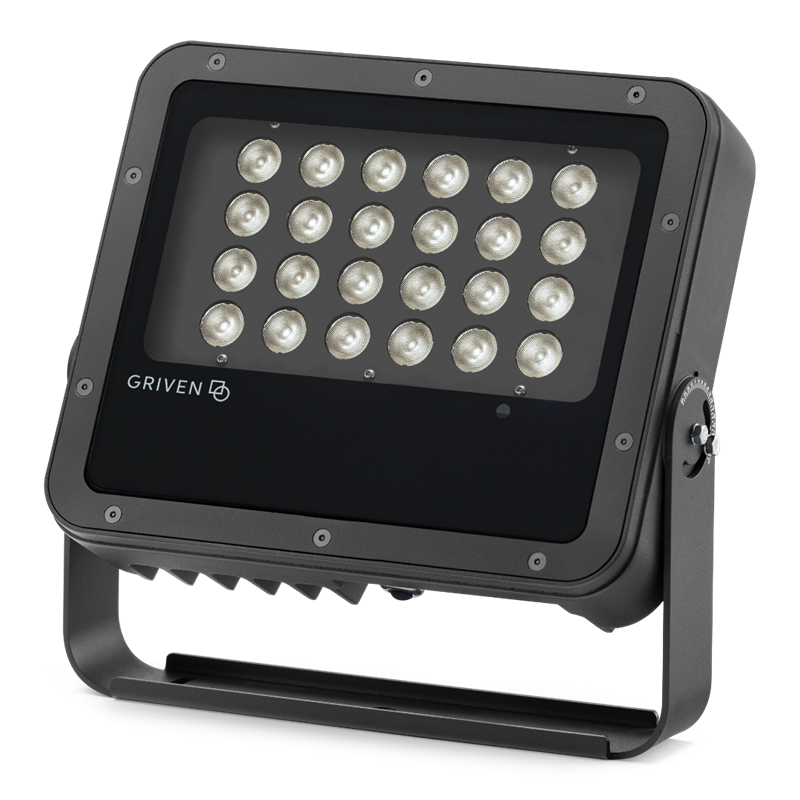