Italy
Part of a larger project, the Civic Tower of Sabaudia has been recently lit up by GRIVEN according to a scheme developed by the world-famous lighting designer Francesca Storaro and the cinematographer Vittorio Storaro, who delivered their illumination concept to the 42m high tower with the help of GRIVEN’s flagships: POWERSHINE MK2 S and PARADE S. Francesca Storaro began her outstanding career as an independent lighting designer collaborating on some projects with his father, the world-famous ‘Maestro of Light’ Vittorio Storaro, multi Academy Award winning cinematographer. Together they lit up Michelangelo's architecture at the Piazza del Campidoglio in Rome, work that became subject of her examination of lighting design. After graduating in architecture, she decided to become a lighting designer. During her brilliant career, she lit up luxurious palaces, antique squares and castles, as well as historic buildings, museums, churches and monuments - such as the amazing Fori Imperiali, the Arch of Janus, and the Great Hall of the Cuirassiers of Quirinale Palace in Rome and the Church of Saint Bernardino in L’Aquila. Having established herself as one of Europe’s leading lighting designers, she has also worked, and keeps working, on major international projects spreading her "culture of light” all around the world, including Switzerland and China. "The Lighting Designer is the one who is able to interpret and translate the language of architecture, sculpture and painting through the language of Light” asserts Francesca Storaro.

Based on a post-modern style, the rationalist architecture of Sabaudia, a small town not far away from Rome, has been appreciated ever since its foundation in 1934 by philosophers, artists and poets for its stylistic architectural perfection. Recognized as the symbol of Sabaudia, the Civic Tower is the natural conclusion of the local road system, which ends up in the town hall square. Completely covered with travertine, the tower is perfectly integrated into the structure of the Town Hall to which it is joined through a small balcony called arengo. Its sober and linear forms make it the very symbol of Sabaudia and of its rationalist architecture. 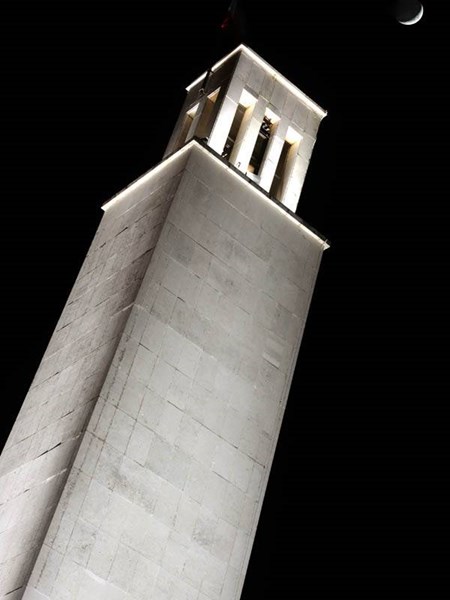 Illumination of the Civic Tower
According to the plan developed by Vittorio and Francesca Storaro, the metal halide lighting fixtures installed in 2012 had to be renovated through LED lighting fixtures, which, thanks to their groundbreaking technology, could allow a considerable energy saving and an almost total absence of maintenance. Moreover, dimmable DMX projectors managed through a dedicated control system were required to deliver both white and coulored (blue) light for the tower, as well as a perfect adjustment of the light intensity for a very high design quality.

After a dedicated and comprehensive photometric report put together with GRIVEN along with the relevant colour rendering and calculation sheets, Francesca Storaro decided to rely on the customization capability and performance reliability of GRIVEN’s fixtures.

Having a considerable height of about 35m (plus the 6.5 m of the terminal part, for a total height of about 42 m), a double row of floodlights at ground level plus an array of fixtures on the small terrace were required to evenly illuminate the whole tower.

17 modular in-ground bars with 40 power LEDs of the PARADE S Recessed series with wall wash optics were embedded in the pavement around the three open sides of the tower in order to illuminate its first 6 metres from the bottom upwards, in a homogeneous and balanced shade of blue. As only blue and white were chosen as options for the tower, the traditional RGBW version of all the specified fixtures required a customization strongly recommended by Francesca Storaro. The customary RGBW LEDs were therefore replaced by three royal blue LEDs and 1 4000K white LED in order to obtain the desired royal blue shade, maintaining at the same time the possibility to switch to white when required.

The second part of the tower, from about 6 metres up to about 35 metres, was illuminated, from the bottom upwards as well, with 5 custom POWERSHINE MK2 S BBBW with a 8° spot optics positioned at ground level along the side adjacent to the Town Hall. The units were recessed into special pits provided with a dedicated protection glass cover. 11 Powershine MK2 S in the same custom BBBW version were positioned on the terrace along with 7 Parade S 40 modular bars in the same custom BBBW variation. Moreover, all Powershine MK2 S units have been customized with a frost filter positioned on 1/3 of the projector, that is onto the first two lines of LEDs, to avoid unpleasant effects due to excessive concentration of blue light that could result unpleasant to the eye.

According to the concept, while for the municipal building a shade of white was selected as a symbol of culture, order and law, the Civic Tower was instead characterized by a royal blue tone, emblem of rationality and reflection. Francesca Storaro explains the philosophy behind the chosen colours: "The white Light assigned to the former Palazzo delle Poste is split into the three primary colours, symbol of rationalism: RED (used for La Casa del Fascio) - GREEN (for the Church) - BLUE (for the Civic Tower). In this way, Sabaudia reflects through its towers the symbol of these three colours.”

In order to deliver a functional-architectural as well as an artistic-communicative illumination to the monument, with due regard for the Superintendent's requirements, the tower will be illuminated in white on weekdays and in blue over weekends and holidays.

Light architect Francesca Storaro is enthusiastic about her job and says: ”The final result is amazing, and it was great to cooperate with Griven team to create special products for this specific project". 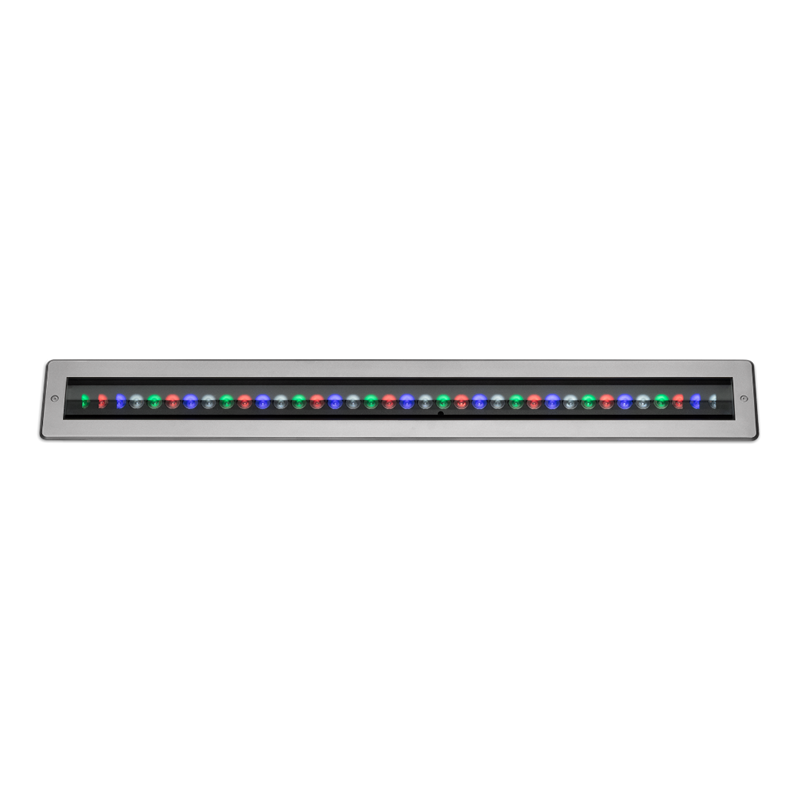