DART Bridge. A GATE TO THE SKY.

UK
Located just 56km (35 miles) north-west of central London, Luton Airport is one of the UK's largest airports and a major base for constantly increasing low-cost air travel. Part of the airport’s impending rapid transit system, the newly built DART Bridge is the direct air rail transit link between Luton Airport Parkway train station and Luton Airport. The passengers transfer from the Parkway Station directly to the terminal will now last only 4 minutes.

Split between coming and going, arrival and departure, rising and landing, the airport was sensed as a symbol of dualism by Knight Architects. As such, an asymmetric geometry was considered the emblematic translation of this dichotomy into an architectural structure. In their vision, the bridge should have been able to draw the attention of the passengers to the sky above while stretching out to the stars.

In order to achieve a luminous wash of light on the inclined surfaces of the bridge’s top chord, unobtrusive luminaires had to direct light downwards minimizing skyward lighting and dangerous glaring to vehicle drivers. Featuring a minimal body and adjustable fixing brackets with no visual impact, the selected luminaires of the nanoPARADE series have been installed end-to-end following the curving silhouette of the pioneering architecture within a concealed overhang located on the top chord of the bridge.

Now available in an optimized version, nanoPARADE RGB is an ultra compact aluminium linear proﬁle featuring on-board electronics, extreme thinness, and lightweight manageability. Fitted with a separate power supply unit, it is the ideal solution for easy outdoor installation on balconies, windows or façades where a reduced mounting space drastically limits the range of suitable products. With an optimal light output efficacy, more units can comfortably be set-up in continuous end-to-end installation for creative wall grazing or linear lighting effects with a uniform visual layout.
Complying with the severe project specifications, the new illumination perfectly highlights the architectural layout of the bridge enhancing its inclination, its well-defined yet slim contours, and its futuristic elegance with a seamless, continuous line of coloured light. Controlled via DMX protocol, the lighting is linked to a centralized control system connected to daylight sensors for public areas. The control system is regulated by a timer in order to switch or dim the light in the various areas based on a daily schedule. The independently addressed luminaires are hardwired so as one circuit failure shall only result in a loss of 50% of the luminous efficacy. .

Delivering a pleasant colour-changing atmosphere, the lighting installation at DART bridge, with its impressive visual impact, is a very significant milestone for the town of Luton as a whole. 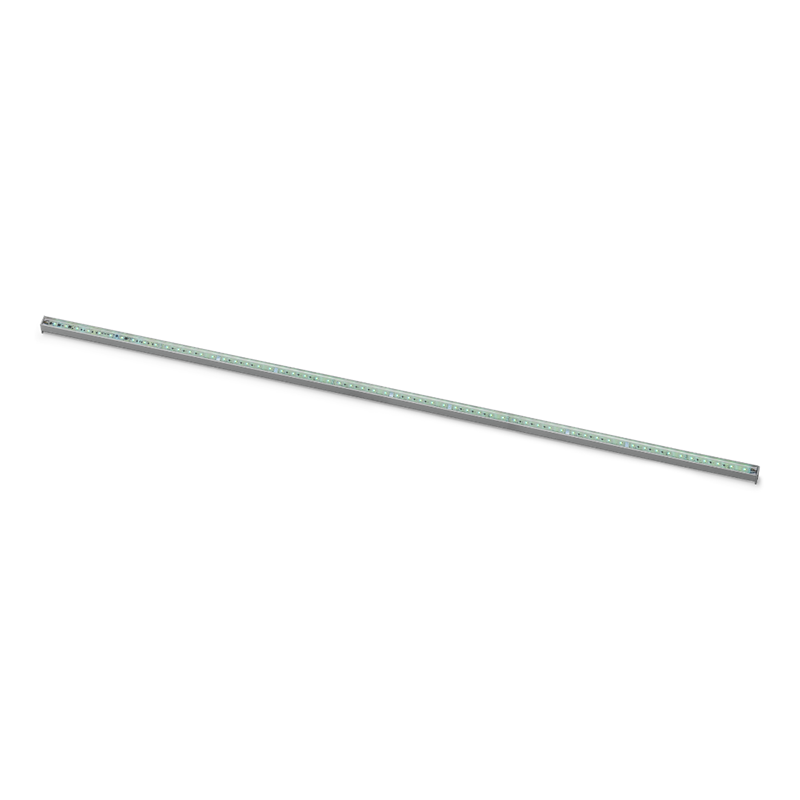