South Korea
The XXIII Olympic Winter Games will be held from 9 to 25 February 2018 in PyeongChang, Republic of Korea after 30 years from the Seoul Olympic Games of 1988. The 13 selected venues will be spread across two areas. The PyeongChang Mountain Cluster will host the skiing and sliding events, while the Gangneung Coastal Cluster will be home to figure skating, hockey, curling, and short track speed skating. The Opening and Closing ceremonies will be held at PyeongChang Olympic Stadium.

About 6,500 athletes from around 95 nations will take part in the 2018 winter games gathering in a newly built hospitality complex, and competing in hi-tech sport facilities, which will allow them to reach their best performances ever. With PyeongChang’s strategic position in Asia, and its easy access to a young and fast growing market, the 2018 Olympic Winter Games will surely draw the attention and interest of new generations of potential athletes to the magic of winter sports.
Year
2017 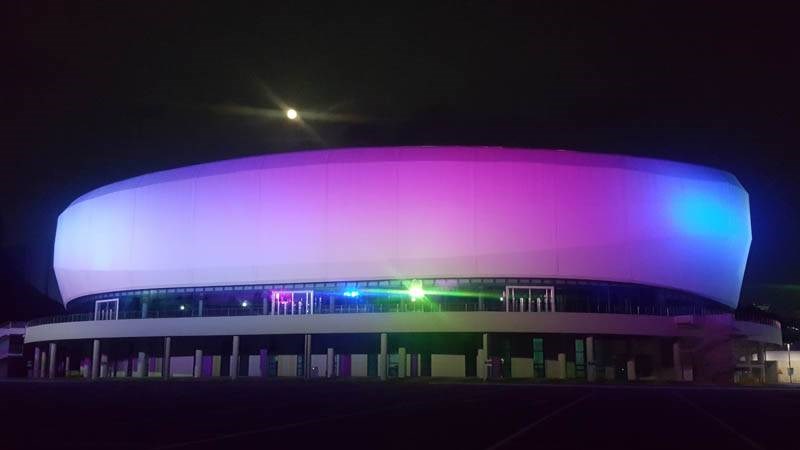 Located in Gangneung Olympic Park, Gangneung Ice Arena is one of the six newly-built venues for PyeongChang 2018. It was the first of the three ice venues built in Gangneung to be completed at the end of December 2016, well in advance for the 2018 competitions. During the winter Olympics it will host the figure skating and short track speed skating events and will then remain as a permanent legacy facility for local recreational use after the games’ conclusion. The Gangneung Ice Arena has a capacity of 12,000 seats and houses two 60m x 30m ice rinks, for competition and training purposes, respectively. With four aboveground and two underground floors, this state-of-the-art venue has been engineered to use a ground-breaking environmentally-friendly ice cooling system, perfectly in line with the green guidelines of the building. Moreover, the venues will be reached by a brand new bullet train, which will connect them to Seoul airport in less than 70 minutes.

Unlike the Rio Summer Games, where workers were applying final touches even as the Opening Ceremony got under way, the PyeongChang Organizing Committee has confirmed that the completion rate for its six new venues is already 100% with a few months still to go. The first test event, the ISU World Cup Short Track Speed Skating, was held in December 2016 at the new Gangneung Ice Arena and 24 more test events have already been scheduled for the next winter sports season in order to check the perfect functioning of the facilities and their structures before the games start. 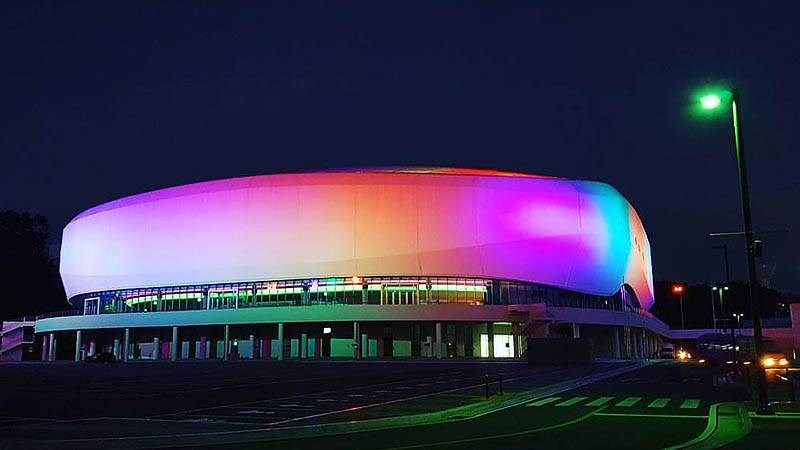 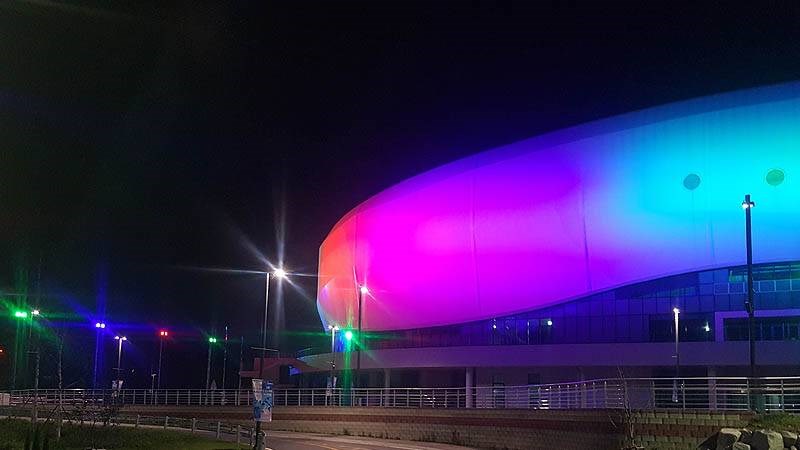 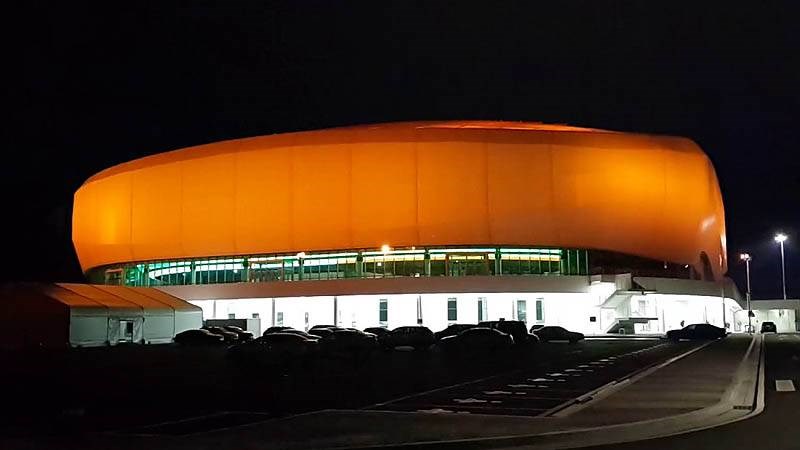 In order to further enhance the design and features of the ice arena by night, an energy saving environmentally-friendly LED lighting system has already been installed and fully tested at the arena. 36 units of Powershine MK2 D in RGBW colour configuration with elliptical optics have been mounted in couples on very high poles located all around the arena at a prefixed distance from each other. The powerful units allow a perfect and even distribution of a bright intense light on the whole perimetral surface of the ice arena, which now stands out whether in uniform monochromatic shades or in a seamlessly fading rainbow chasing colour effect.

We are proud to give our contribution to the success of this event as we did on the occasion of 2014 Sochi Winter Olympic Games, where we had the occasion to illuminate, with the help of over 1700 LED lighting fixtures, two significant buildings within the Olympic Park area: Hercules Hotel Complex and the Main Media Centre.

With the 2018 winter games, Gangneung will further consolidate its primate as number one tourist destination city in South Korea and it will surely do it in a colourful shiny way!