Ireland
Ireland is a country known for its rebel spirit, and the marks of rebellion are visible throughout its capital city, Dublin. While monuments to Irish insurgence and freedom dot the city, there is one place where the significance of the many uprisings strikes more deeply than any other: Kilmainham Gaol.

Opened in 1796, Kilmainham Gaol experienced some of the most heroic and tragic events of Ireland's history. Today the building symbolises the tradition of militant and constitutional nationalism from the rebellion of 1798 to the Irish Civil War of 1922-23. Leaders of the many rebellions, which covered the 18th and 19th century, along with most members of the Irish Republican movement and the leaders of the 1916 Easter Rising, were also detained in Kilmainham and subsequently executed by the British. As a county jail, Kilmainham also held thousands of ordinary men, women and children, whose crimes ranged from petty offences to more serious crimes. Convicts from many parts of Ireland were held there for long periods waiting to be transported to Australia.
Year
2018
Lighting
Enlighten
Consultants
Dervan Engineering, Dublin
Pictures
Con O'Donoghue 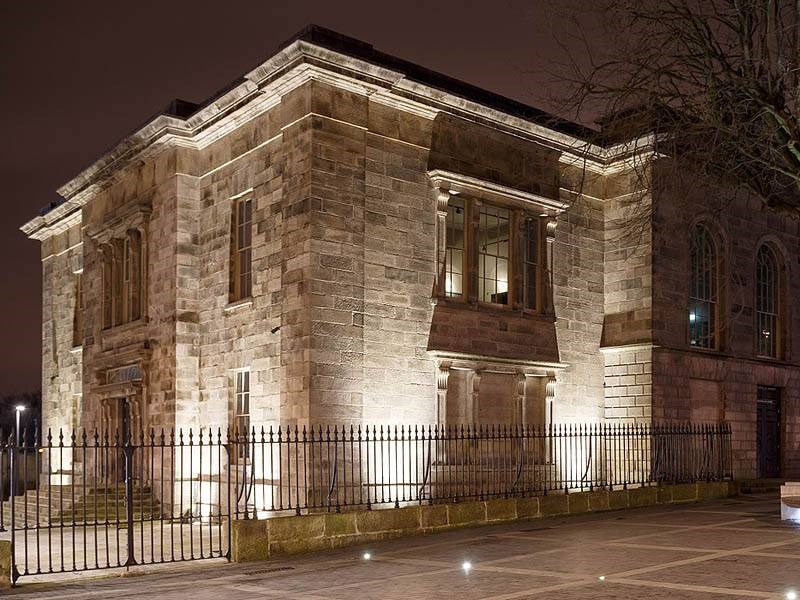 In 1910 the jail was closed as a convict prison and handed over to the British army, who used it as a military detention centre. Only a few decades after its abandonment in 1924, a group of veterans came together with the goal of restoring the building as a memorial dedicated to the 1916 Easter Rising’s national heroes. Since 1990 the popularity of Kilmainham Gaol and of its Museum - which collects approximately 10,000 objects related to the political and penal history of Ireland - has arisen enormously hosting over 300.000 visitors a year.

While the interior of the jail architecturally still reflects the need for constriction with its oppressive configuration, the outside structure is a really elegant and timeless fortress with its small iron-grating windows, inaccessible stone walls and decorative allegoric features. All the perimeter of the building has been lately lit up in warm white by a series of recessed LED lights in order to enhance through an aimed uplighting system the building, lately become an unmissable tourist attraction. 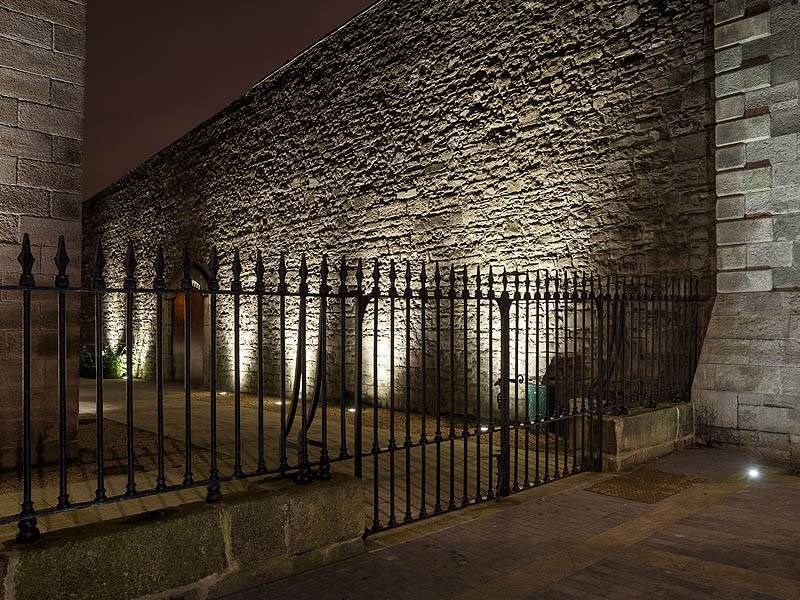 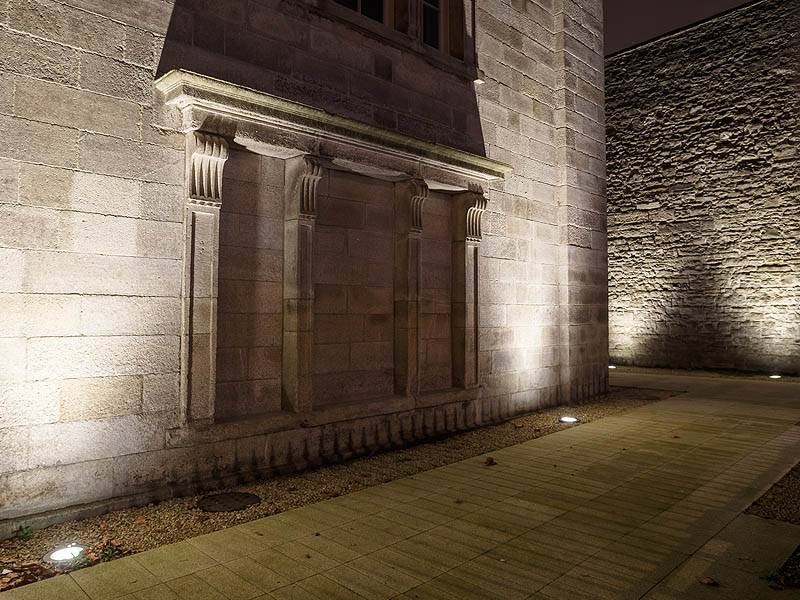 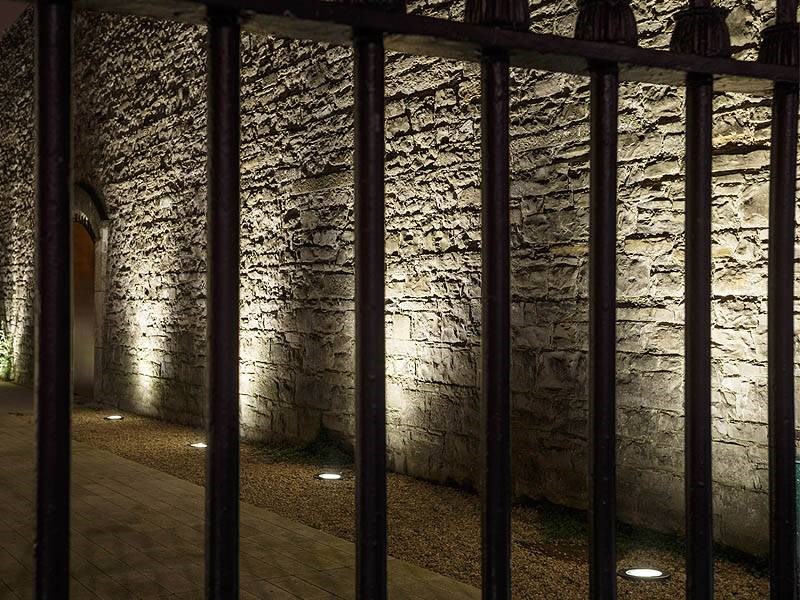 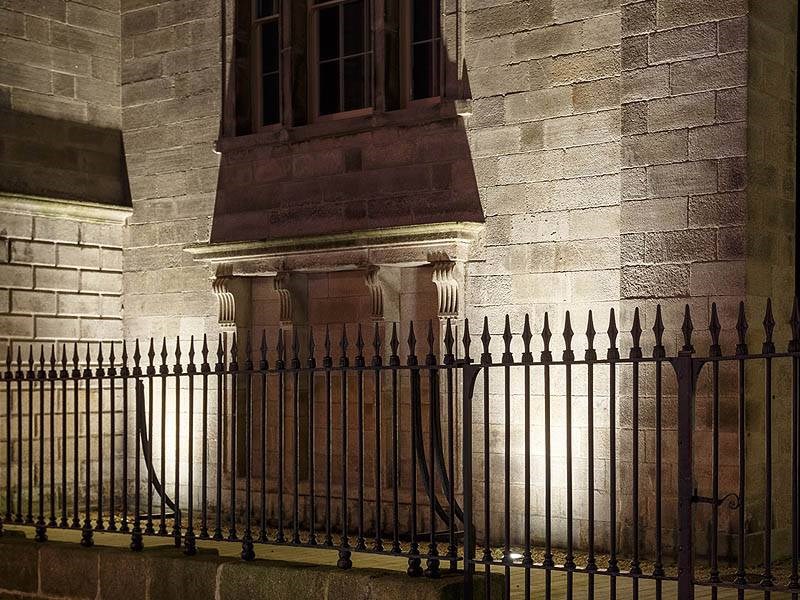 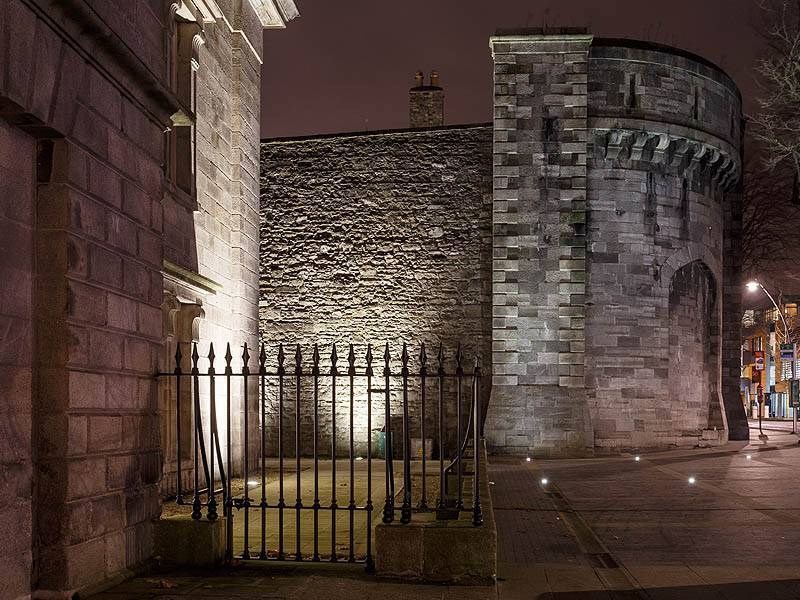 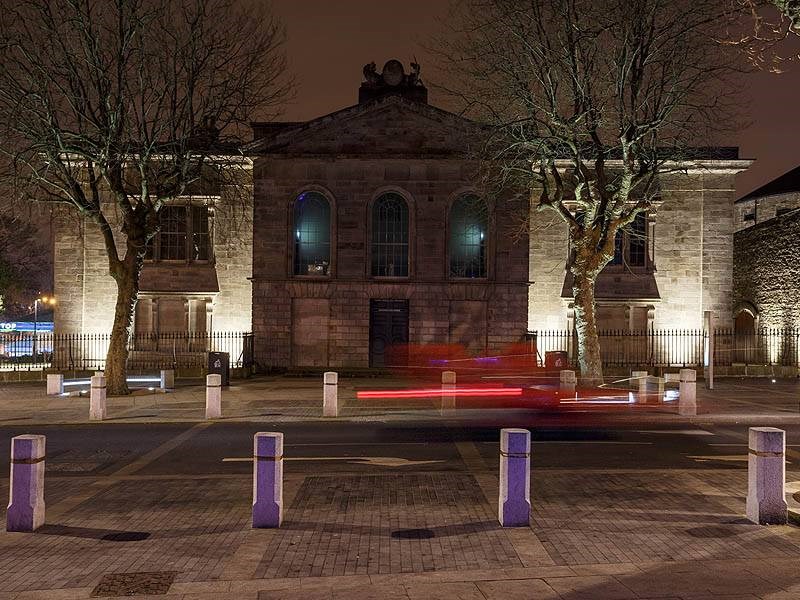 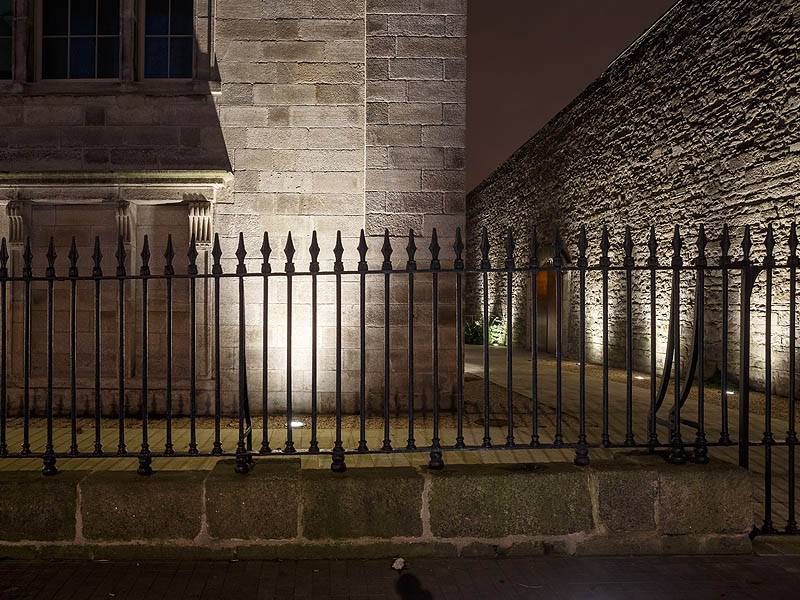 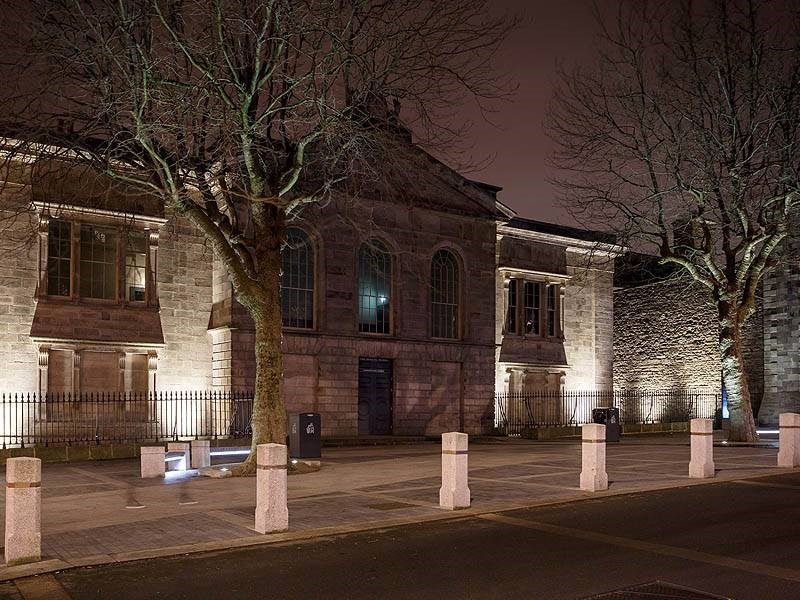 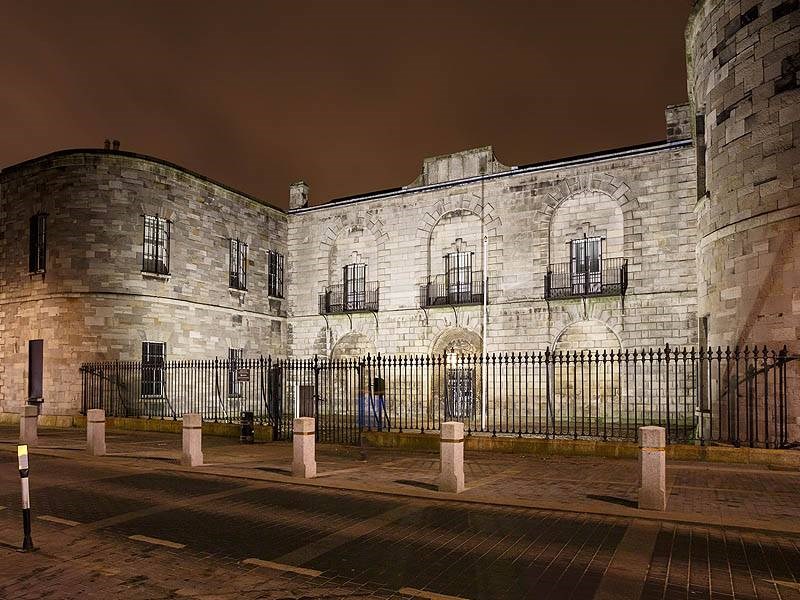 Created by Enlighten, a Fantasy Lights Group company providing professional LED and architectural lighting solutions across a diverse range of commercial, industrial, retail and civic applications in Ireland, the dedicated lighting design is based upon a large number of GRIVEN’s DUNE MK2 in warm white light configuration with wide optics. The fixtures have been embedded in the pavement all around the building according to a preselected scheme, which allows the uplighters to throw a well defined beam of warm light against the walls of the former jail, creating a pleasant alternation of light and shadow.

DUNE MK2 W is a super compact white LEDs fixture, engineered for exterior recessed applications. Fitted with the highest precision technology, the 20 LEDs utilized have been coupled with the most effective optics to give an extremely homogeneous white light output. The unit can be customized with a wide choice of lenses to suit additional requirements of alternative beam creations, always preserving the highest luminous efficacy. DUNE W MK2 is available in both cold and warm colour temperature white light versions to meet any design specification. Featuring an IP67 weather protection rating and a 2000 kg deadweight load capacity, DUNE W MK2 is suitable for ground mounting applications even in vehicled areas. 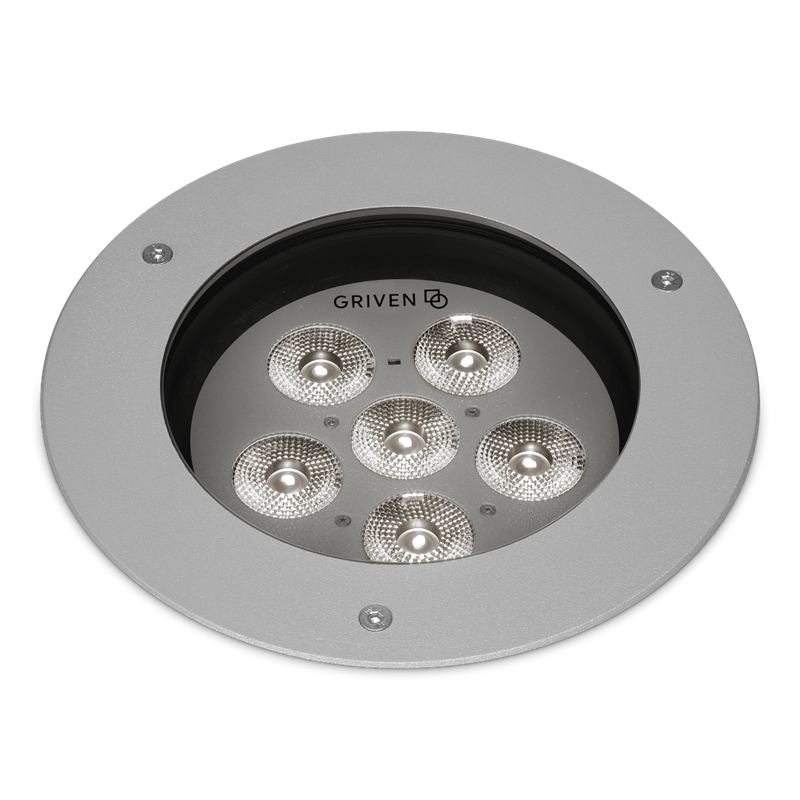 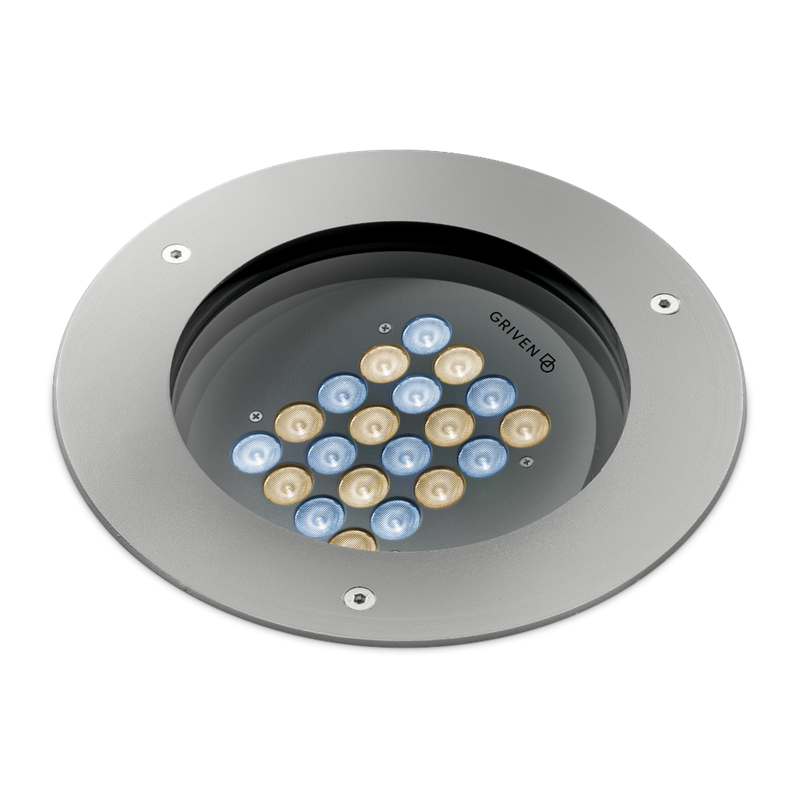