Russia
Listed as a historical and cultural heritage site, Krymsky Bridge, also known as Crimean Bridge, is considered one of the most beautiful bridges in Moscow. Spanning the Moskva River in downtown Moscow, Krymsky Bridge is a steel suspension structure unique in the city that links Crimean Square to Krymsky Val Street.

Its latest layout dates back to Stalin's reconstruction period, when every bridge in downtown Moscow was either bound to be rebuilt or scheduled for demolition. The new Crimean Bridge was completed on May 1, 1938 and partially restored in 2001 through the replacement of roadway and pedestrian pavements with ground breaking waterproof and anti-corrosion materials. Nevertheless, its old fashioned, enchanting allure has remained unaffected throughout all these years.
Year
2014
With a total length of 688m, a width of 38.5m and a weight of 10 thousand tons, this suspension bridge, which hosts a 6-lane road and two pedestrian pathways, is supported by four pylons reaching a height of 28.7 m. On top of each pylon, heavy metal chains bear two girders (each over 300 metres long), whose ends are anchored to massive concrete counterweights.
In line with the general lighting renovation plan of Moscow city center, 22 bridges have recently acquired a new look, which has been developed on a common illumination scheme. The appointed lighting designers have drawn inspiration directly from nature relating each single bridge, according to its peculiar features, to different raw minerals, precious stones or metals, in order to create a matching colour palette for all Moscow bridges. In this way, each bridge is not just an isolated multitude of lights and shimmering colours, but has its own individual identity which is, at the same time, deeply linked to the renovated cityscape.

For Krimsky bridge, one of the most representative and central landmarks of the Russian capital, a reddish-golden shade based on the natural colours of rutile and quartz has been chosen to identify its essence. Every night, warm tones of white light reflect in the water surface of the river the silhouette of the suspension bridge, harmoniously softening the visual perception of this massive engineering structure. The bridge becomes hereby the logical continuation of a nature that is not always enough appreciated in a bustling and dynamic metropolis like Moscow. 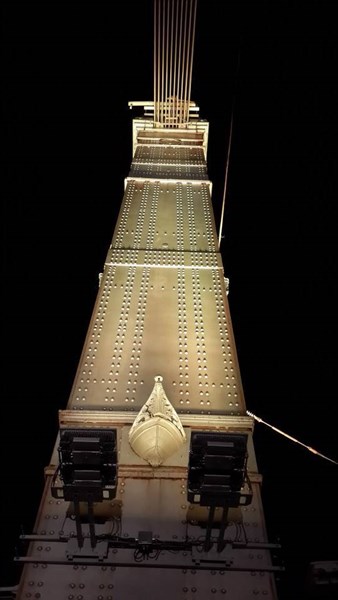 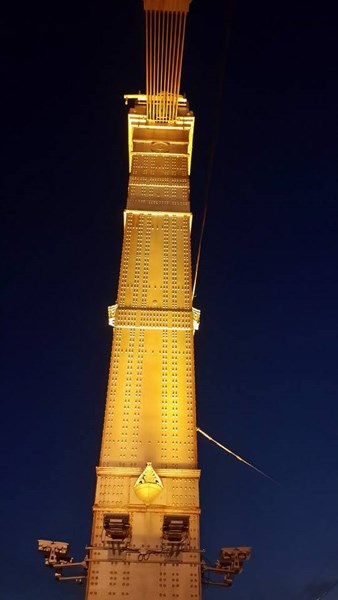 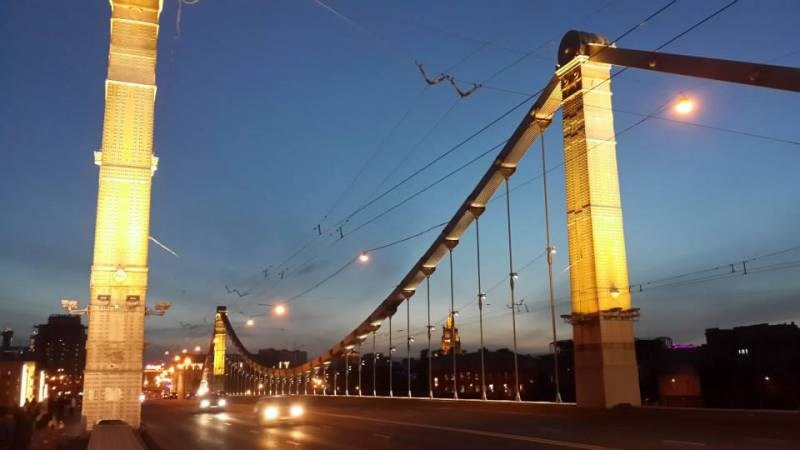 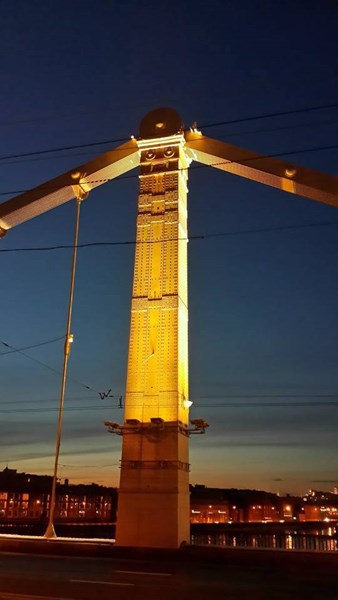 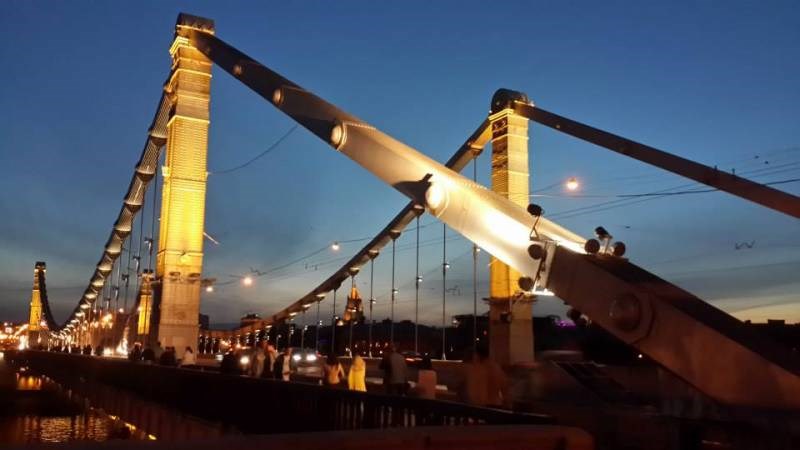 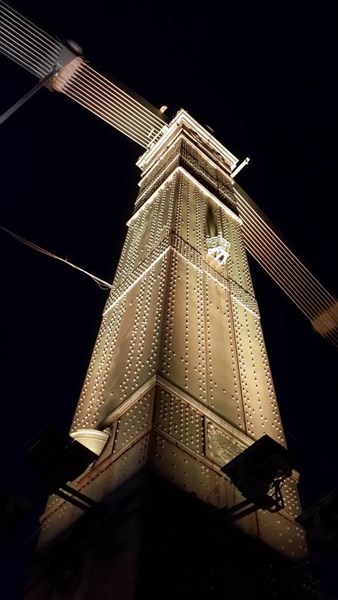 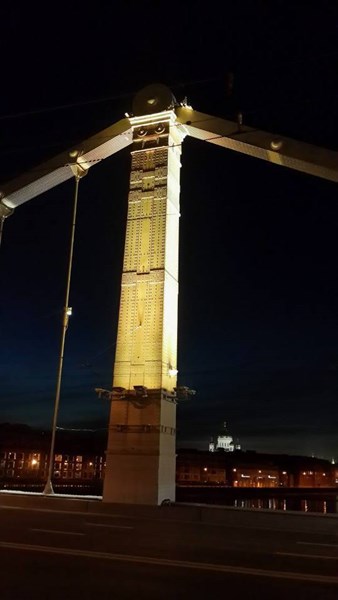 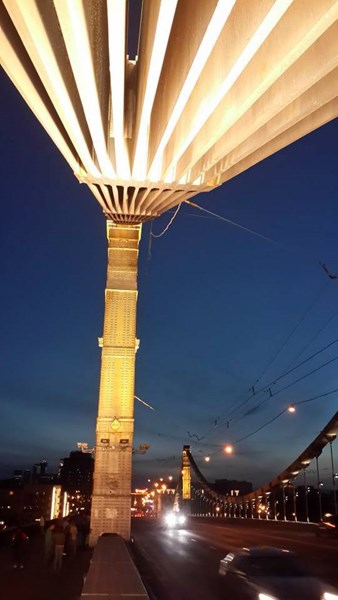 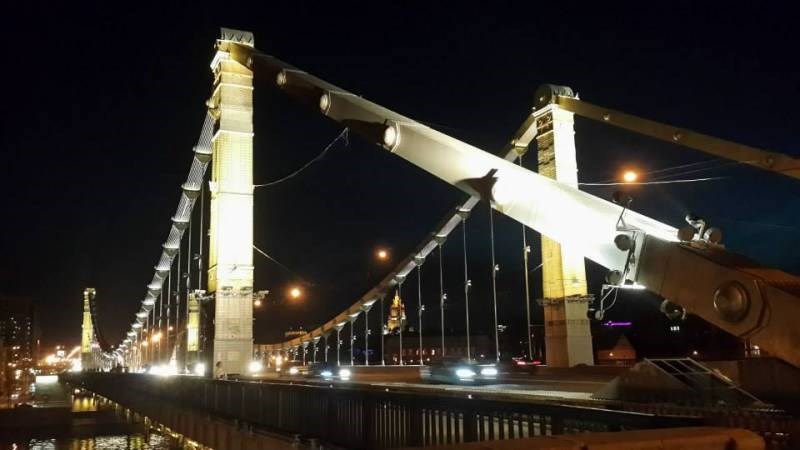 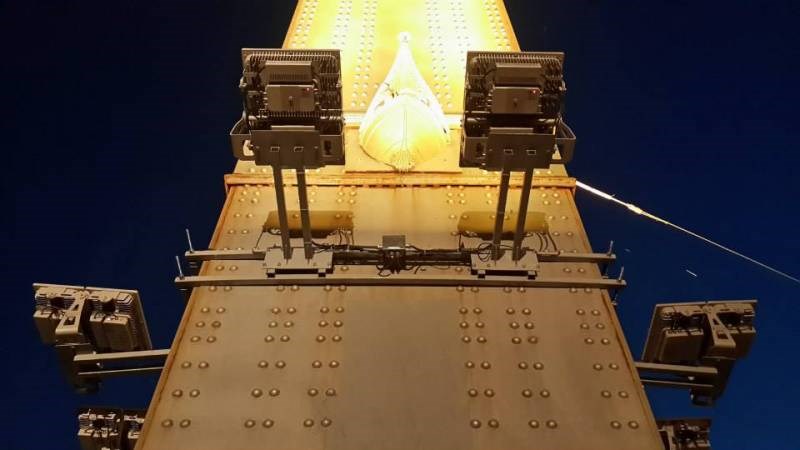 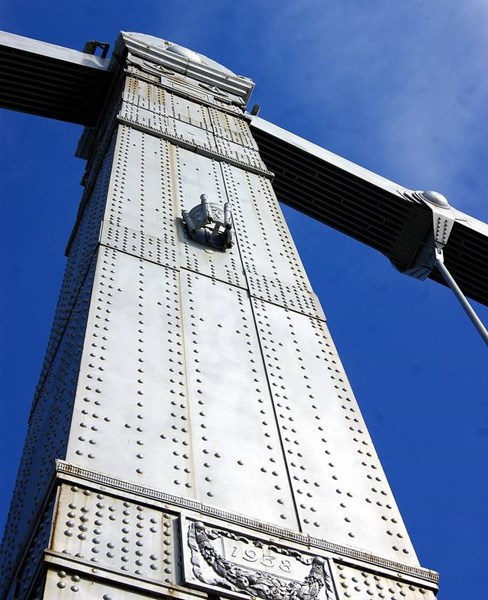 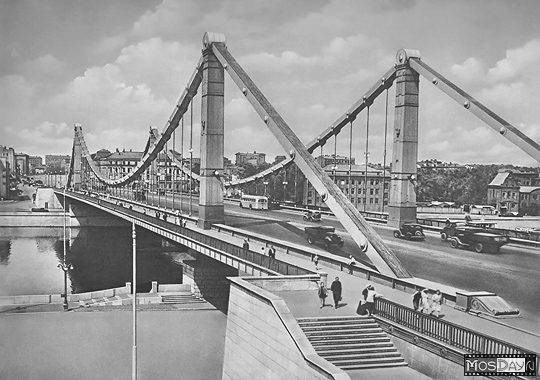 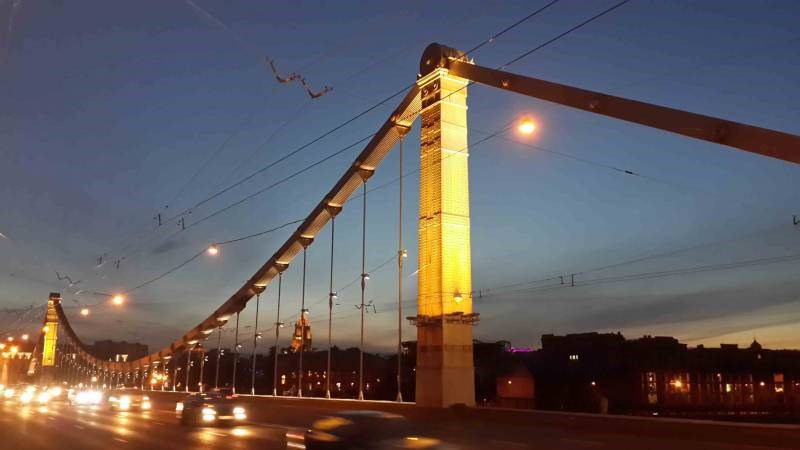 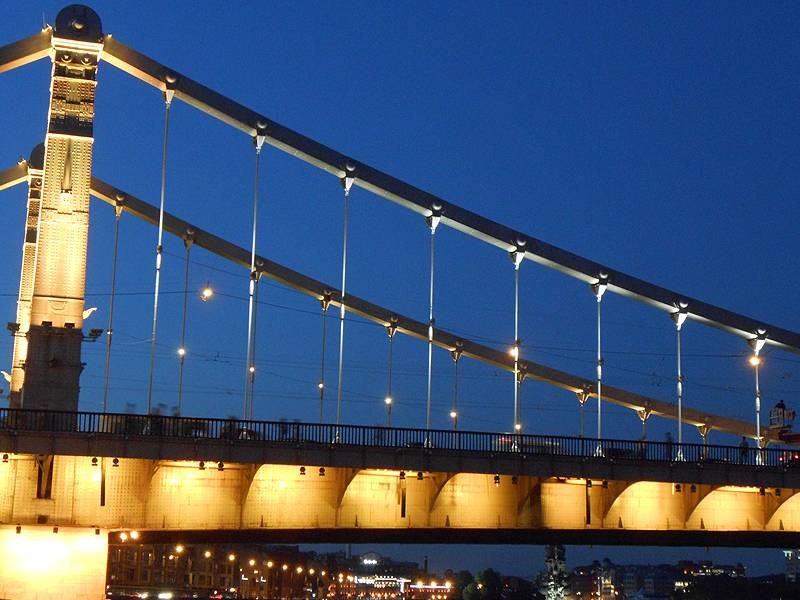 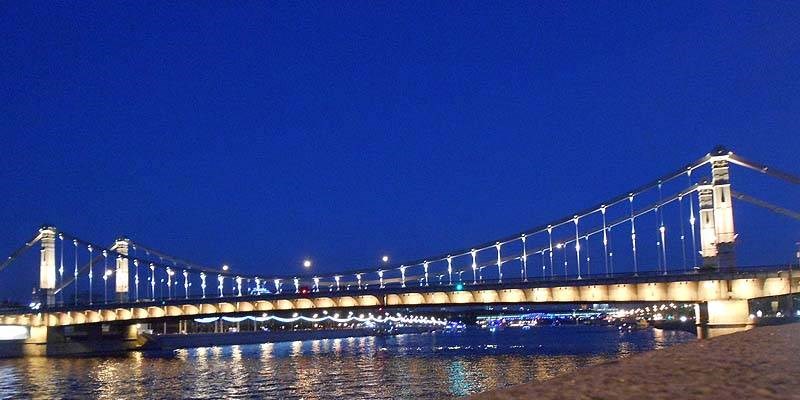 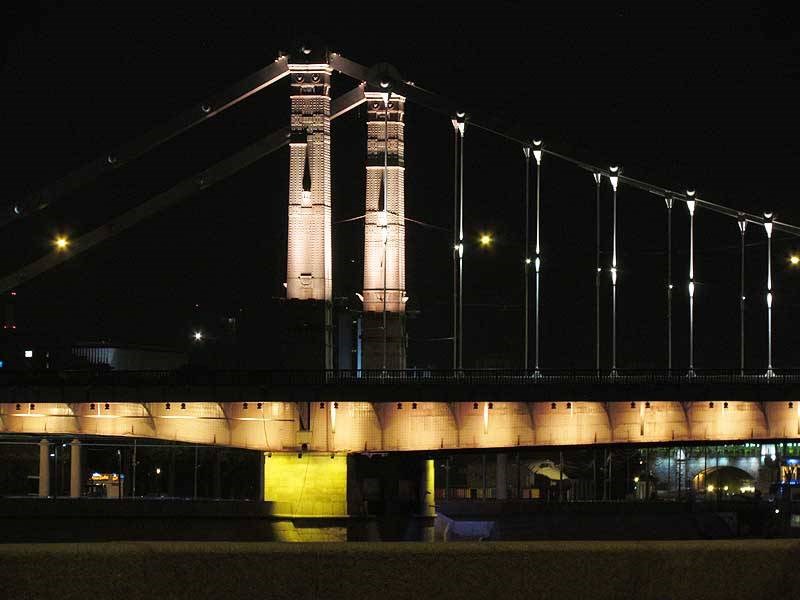 In order to light up the four pylons of Krymsky bridge, powerful LED lighting fixtures that could effortlessly reach their top with a bright and uniform distribution had been strongly recommended. Specified and installed by the Russian firm Svetoservice and imported by the exclusive GRIVEN distributor for this area, DSL Company, 32 Powershine MK2 D RGBW with narrow optics have been installed two by two at the base of each side of the steel pylons to highlight their complete height, while skillfully emphasizing their architectural essence, symbol of the Soviet era. The chosen lighting pattern features a warm white light for the everyday lighting scheme, while a dynamic colour changing mode is preferred for weekends and holidays.

POWERSHINE MK2 D uses a total of 192 powerful RGBW LEDs and is available with a vast choice of optics for the maximum lighting design flexibility. Owing to its double cluster configuration, which offers full independent control of each LED bank, this wall washer allows absolute freedom to create matching or divergent effects on formerly prohibitive large-scale facades and remote spots. The combination of RGBW LEDs provides an unprecedented astonishing white light output quality, as well as a wider variety of intermediate colour hues for an even broader range of application purposes. POWERSHINE MK2 D Polar Edition features an integrated de-icing system with electrically heated glass, which assures a comfortable functioning even in the utmost severe cold weather conditions. 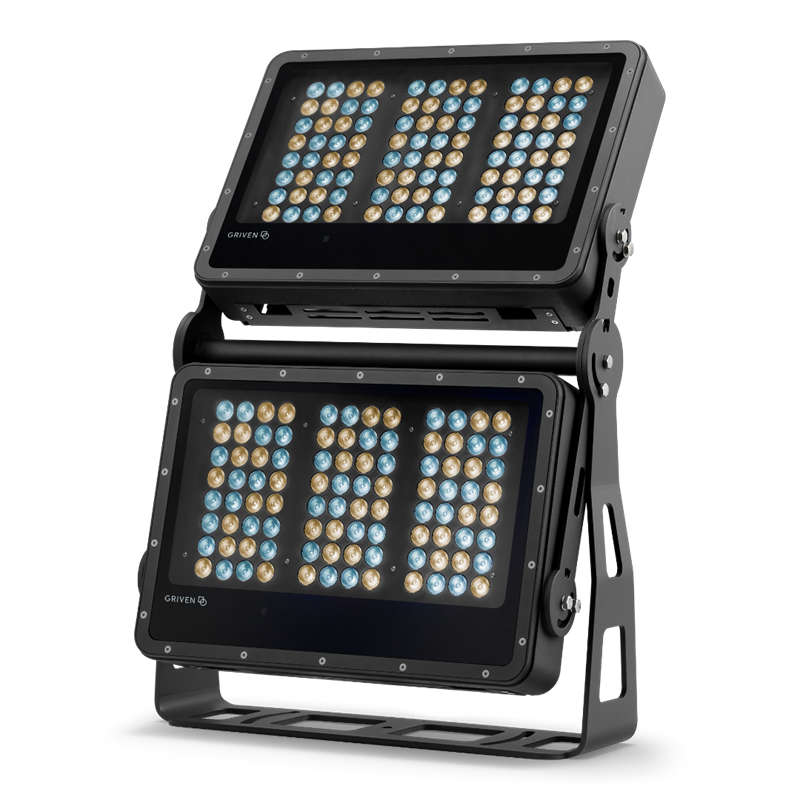 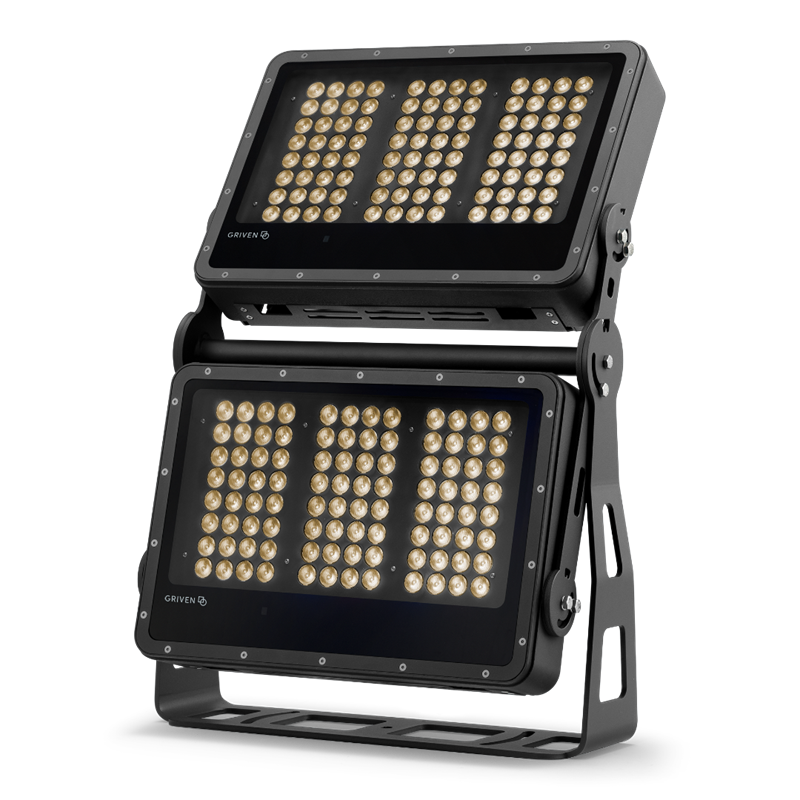