Italy
Located in the area of Porta Romana, QC Termemilano is an oasis of well-being isolated from the chaos of the city centre only by the impressive remains of the Spanish Walls dating back to the 16th century. Housed in a Liberty building, the QC Termemilano are the ideal destination for those who want to indulge a day to rediscover their psychophysical balance in a relaxing and luminous environment, where an elegant architecture harmoniously blends with the most modern technologies.

Built in the late nineteenth century, the Liberty Palace of Porta Romana hosts a multi-sensory thermal center with over thirty well-being proposals articulated among biosaunas, different wellness paths and whirlpools, complemented by a large spa garden with an external pool bordered by the Spanish walls.
Year
2018
Pictures
QC Termemilano 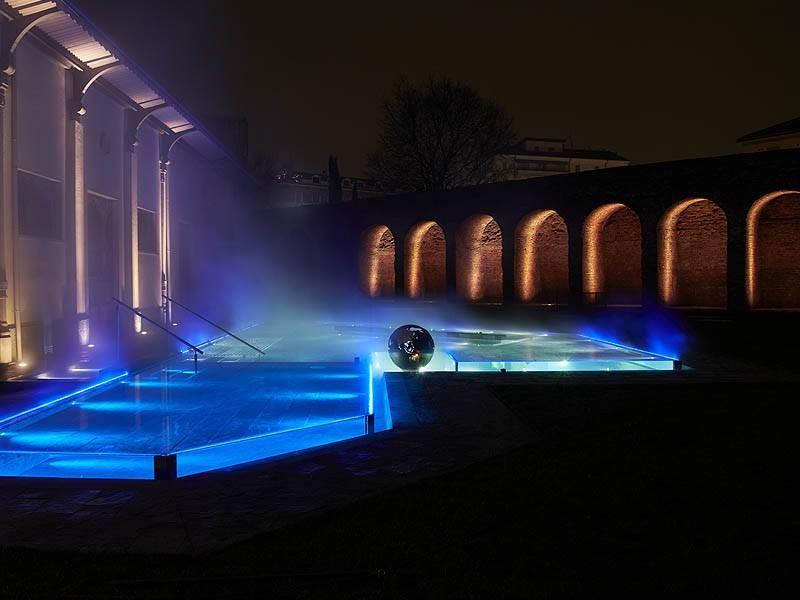 In December 2017, on the occasion of the tenth anniversary of the SPA complex, major restyling works have further enhanced the new "10 years" pool, a 100-square-meter warm water stone pool, whose contours harmoniously follow the profiles of the Spanish walls, celebrating the water as the core element of wellness.

Within this restyling project, GRIVEN has been charged with the illumination of the Spanish Walls whose inner part, directly facing the thermal park, is distinguished by a series of beautiful rounded arches that frame the green area delivering an evocative atmosphere.

The Spanish Walls were erected during the Spanish domination of the Duchy of Milan to protect the city. Built from 1548 to 1562 to replace the obsolete medieval walls, they were transformed into tree-lined pedestrian walkways during the 18th century. Afterwards, they were largely demolished in the late nineteenth century as a sad consequence of the first town plan of Milan. 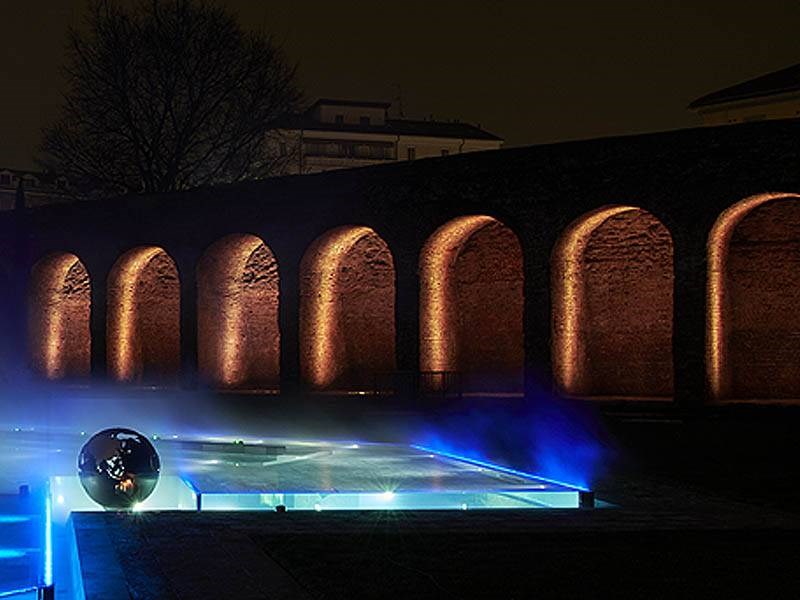 The QC Termemilano restyling project included also the illumination of the arches of the Spanish Walls in a warm shade of white that could emphasize the already evident architectural contrasts between different styles and historical periods, without renouncing the possibility of adding a touch of colour in case of special events or festivities. A custom version of the modular bars PARADE S-RGBW-40, with an elliptical optics optimized to deliver a perfect light mixing at the base of the arches was regarded as the best option to achieve the desired result. Now the profiles of the arches stand out in the dark offering, with their recurrent pattern, an amazing view at night.

PARADE S-RGBW-40 is a modular and adjustable super flux, high luminance bar featuring 40 RGBW LEDs grouped in clusters of 4 LEDs each. Superb output with real uniform colour coverage even on close-up installations is provided by the newly conceived elliptical and elliptical wide optics specifically designed for true wall washing effect. The powerful luminous flux tops the standard range of similar products available on the market. PARADE S-RGBW-40 can be installed in any position and in any orientation, featuring an IP67 weather protection along with a compact size and a light weight manageability. Moreover, a truly comfortable set up is guaranteed by the total absence of external power supply box requirement.