Ireland
New Ross, a thriving town set in rich rolling countryside on the banks of the river Barrow, was one of the first Irish towns to be developed by the Normans. By the first half of the thirteenth century it had already established itself as a successful port due to its key location, becoming by the end of that same century the busiest harbour in Ireland.

Nowadays, the bustling town of New Ross is home to the Dunbrody Famine Ship, a full-size replica of the ship built in 1845, which was used to transport emigrants to North America. Offering a truly amazing journey in time, the Dunbrody Famine Ship along with its visitor centre is now a highly successful tourist attraction with an average of 60,000 visitors per year. It serves as a reminder of the hardship, famine and oppression, which forced the Irish population to a mass emigration in the 19th century.
Year
2017
Lighting design
GRIVEN S.r.l.
Contractor
Primary contractor and Project Leader: Al Read, Al Read Electrical
Lighting
Enlighten, part of the Fantasy Lights Group
www.enlighten.ie 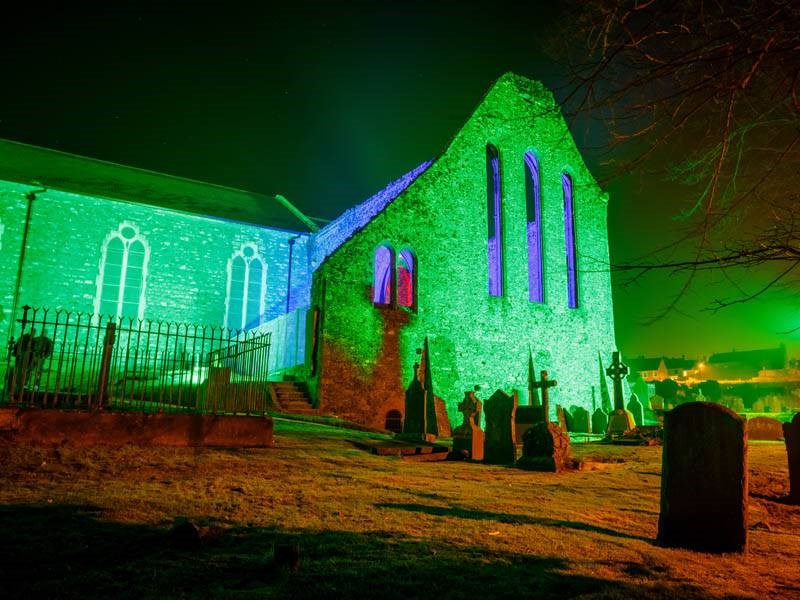 New Ross is also the ancestral home of U.S. President John F. Kennedy. It was on the quay of New Ross that his great grandfather boarded a Famine Ship bound for America. President Kennedy embodied the ultimate success story of the Irish emigrant family, passing from famine emigrant to the most powerful man in the world in just three generations. President Kennedy’s visit to Ireland in 1963 was a pivotal moment in Irish history and is commemorated by a lifesize statue located on the quayside of New Ross.

Within this historically rich background, the medieval Saint Mary’s Church stands out for the beauty of its amazing Gothic features, although time has taken its toll and all that now remains is a ruin. Completed in 1210 on the ruins of a 6th century monastery, Saint Mary's Church is one of the largest medieval parish churches in the whole of Ireland.

Built in 1812 within the footprint of the old nave of Saint Mary’s Church, the present Church of Ireland preserves only a ruined chancel and the transepts from the medieval remains. The chancel features an aumbry and a damaged sedilia on the south wall, a tomb canopy and niche on the north wall. There are also some good coffin lids and some relatively modern box tombs left in the church. The east gable presents three lancet windows typical of the Gothic style.

The old chancel and the north and south transepts contain one of Ireland's largest collections of medieval tombstones. One features a cross with Lamb of God, symbolism associated with the Knights Templar. Another curiosity is represented by a woman buried next to both of her husbands, a true rarity in the Middle Ages.

Owing to the historic relevance of this church, it was decided by Wexford County Council to enhance the building with a new attracting colour-changing illumination. As the primary contractor and project leader, Paul Read from Al Read Electrical worked closely with Enlighten, part of the Fantasy Lights Group, and Griven to develop and install a unique lighting solution.

The approved lighting design involved the illumination of all the sides of the church in bright, lively colours, which enhance the architectural features of the historical site with an intense, uniform light distribution. In order to comply with these requirements, the newly improved version of Powershine MK2, in its single and double bank configuration, was proposed, and accepted, as a highly efficient and high-performing solution. 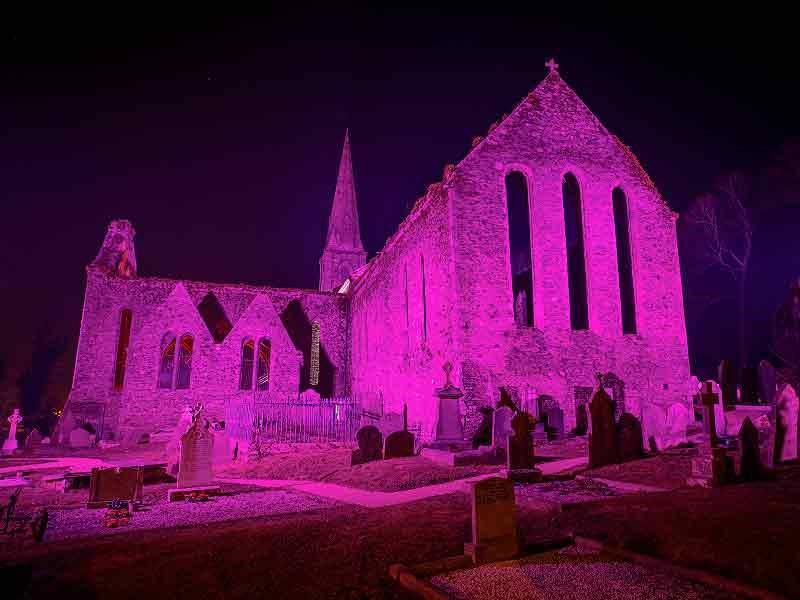 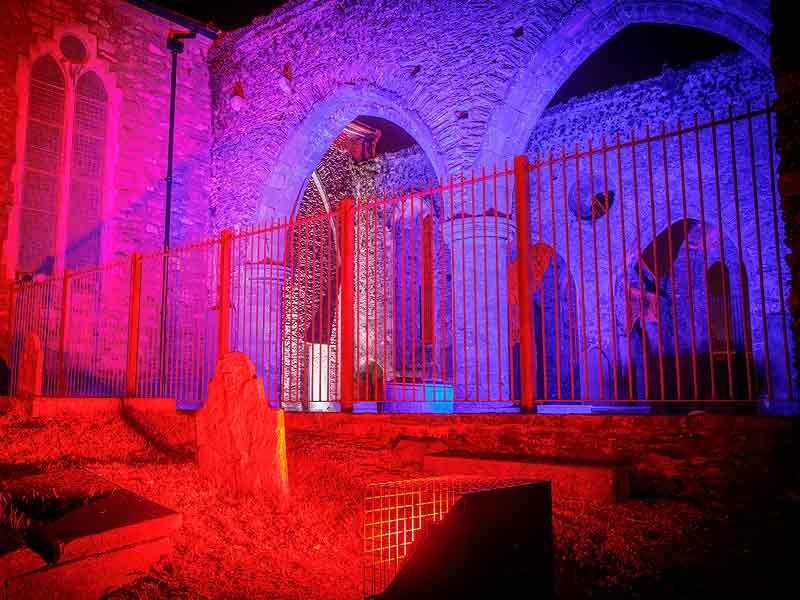 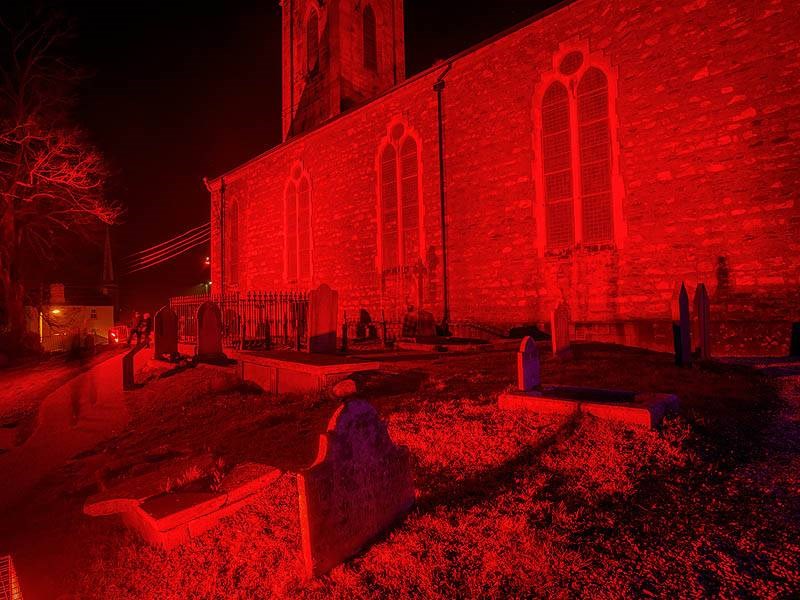 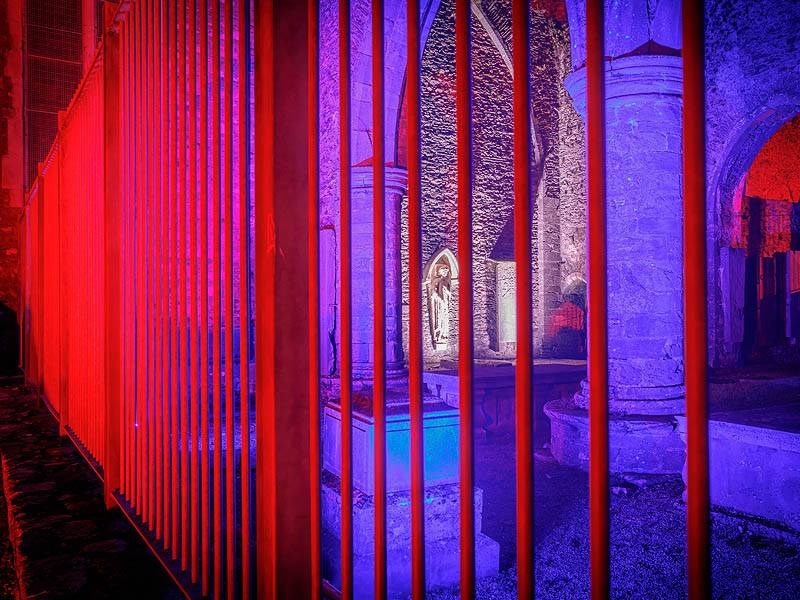 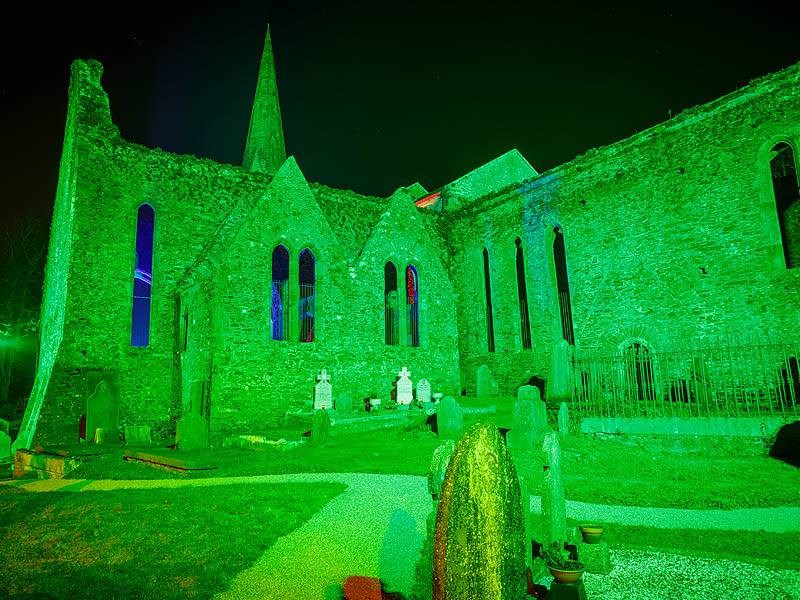 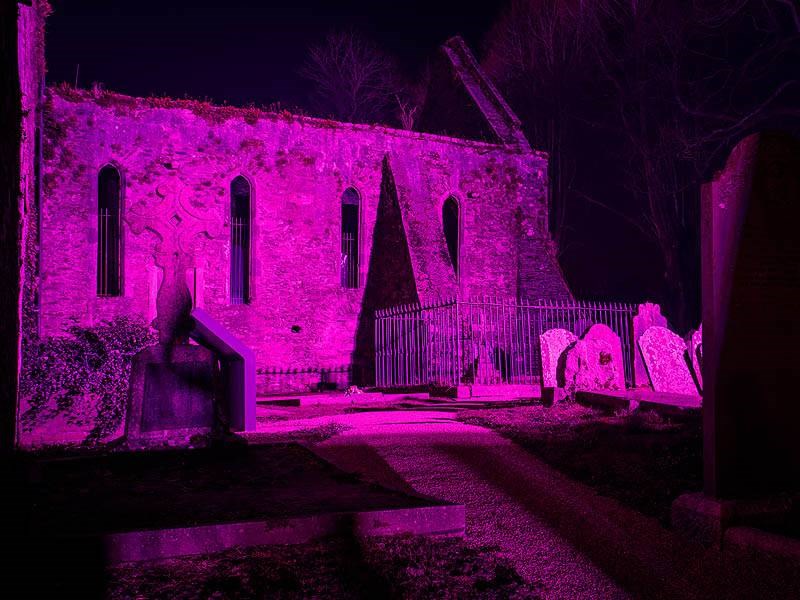 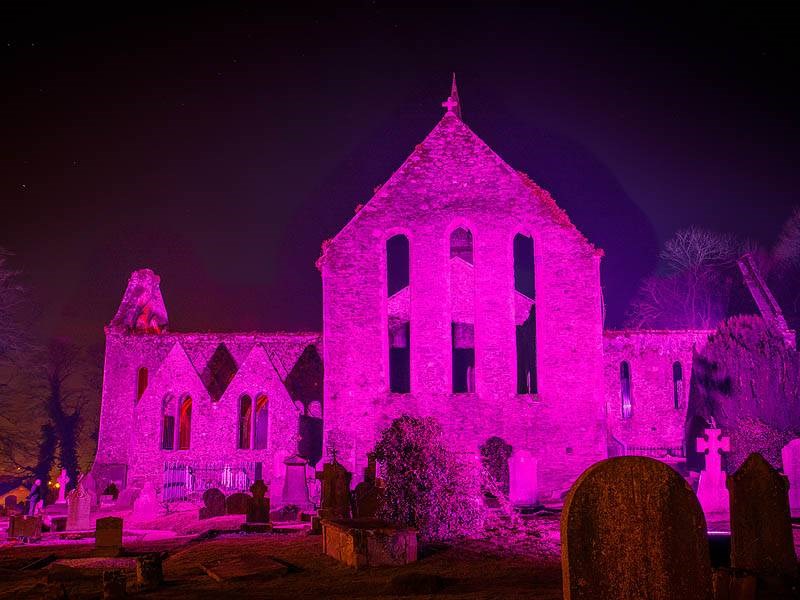 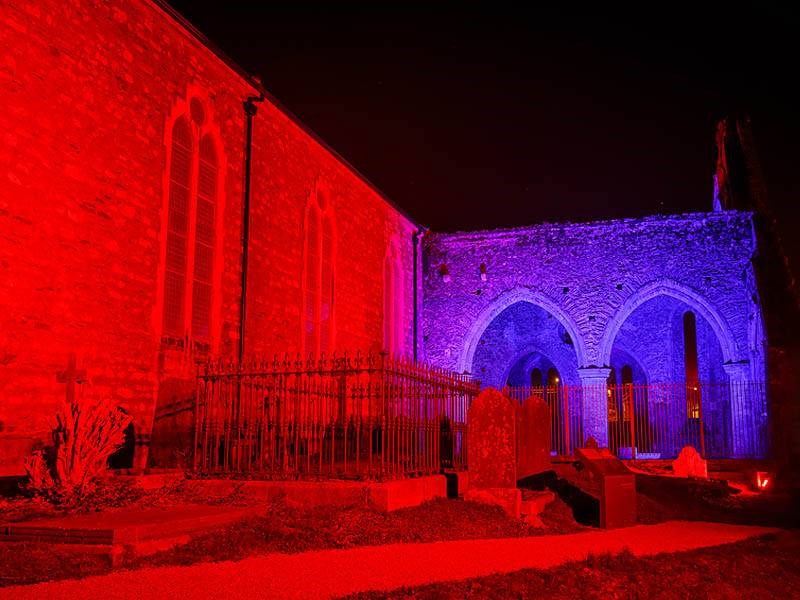 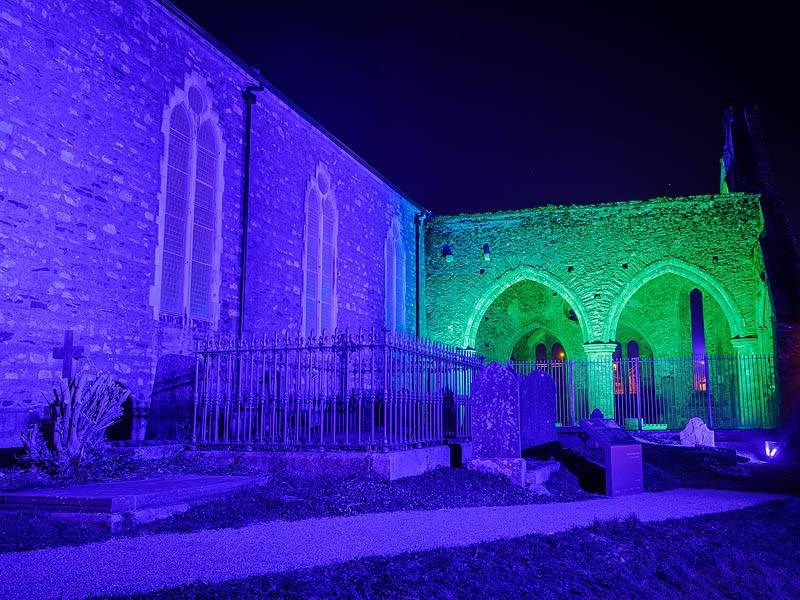 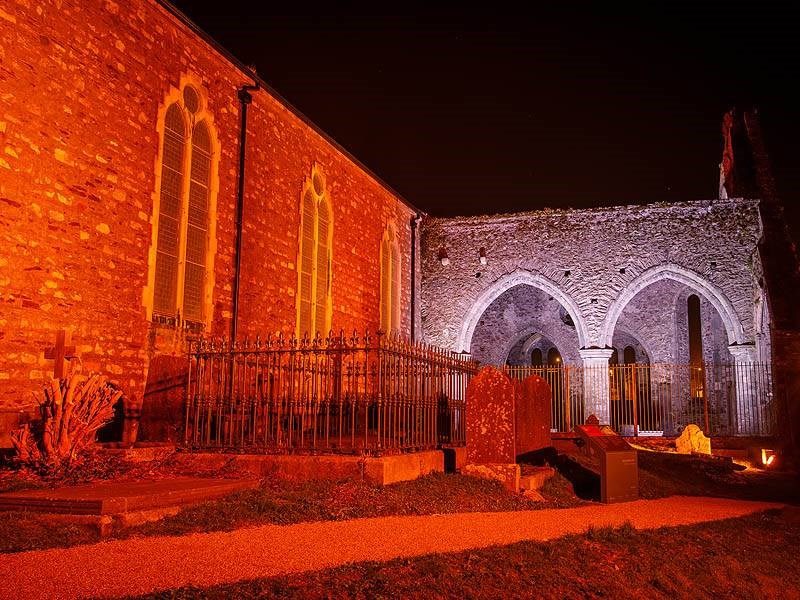 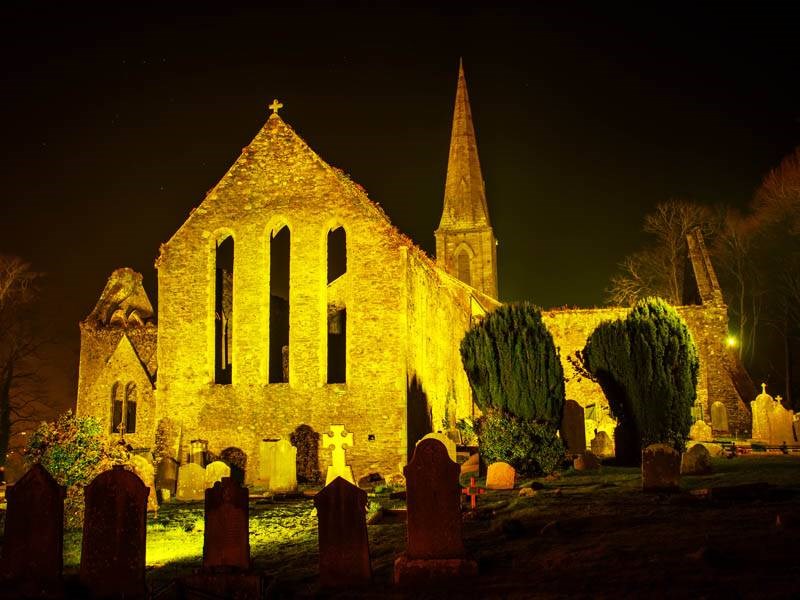 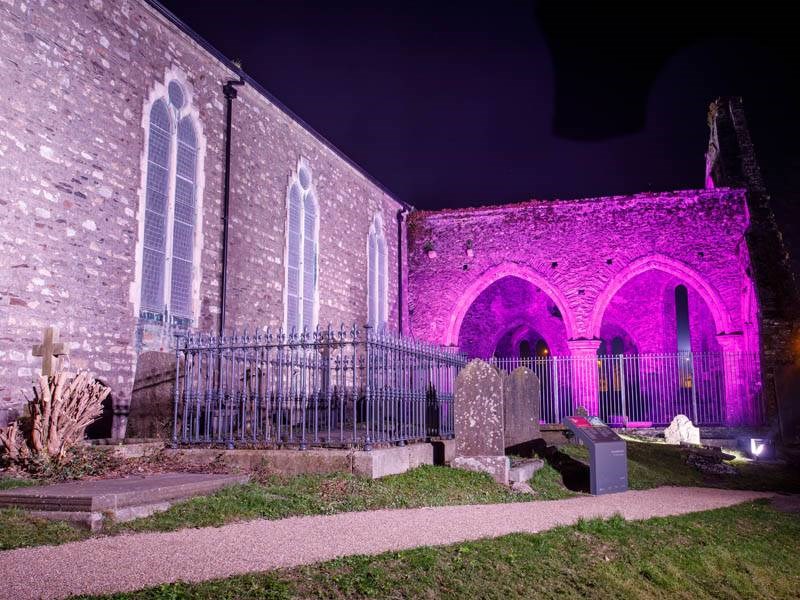 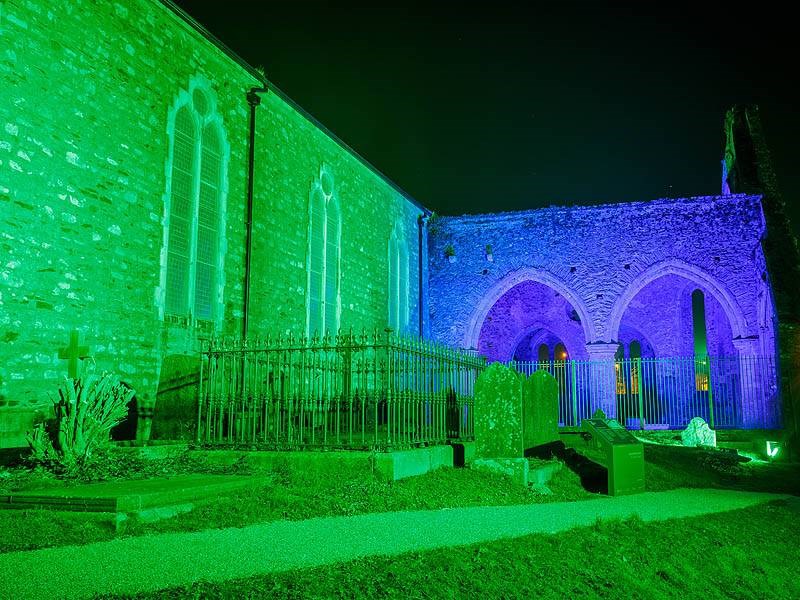 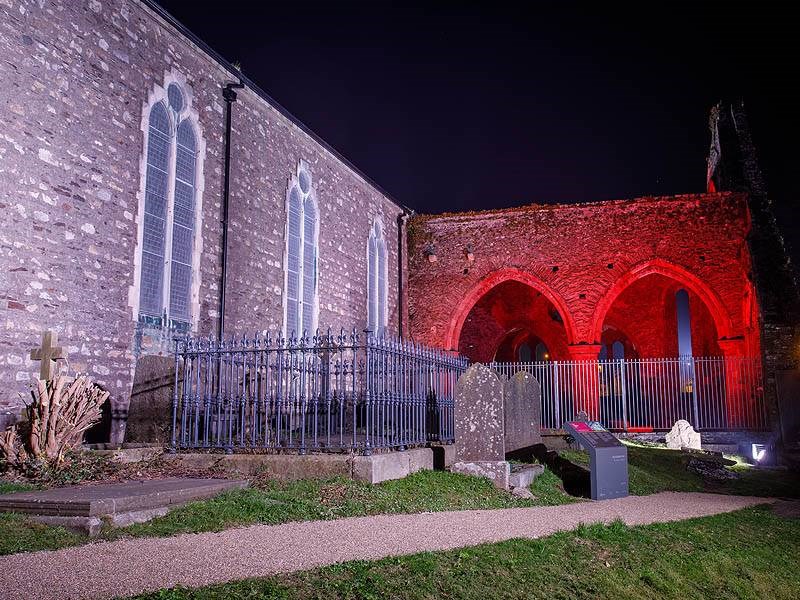 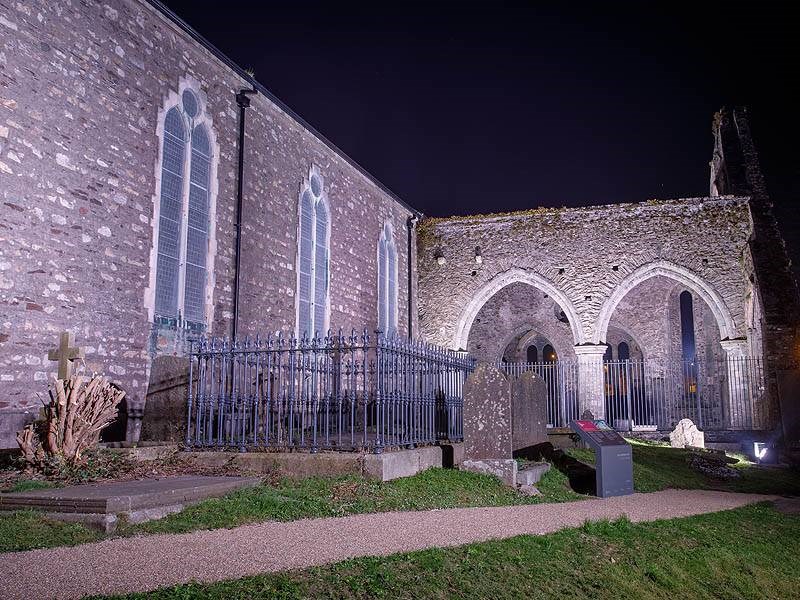 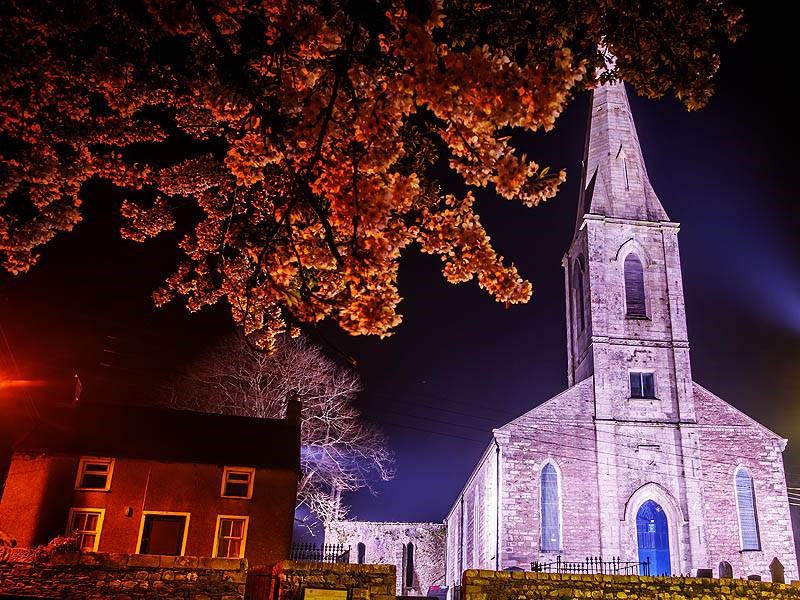 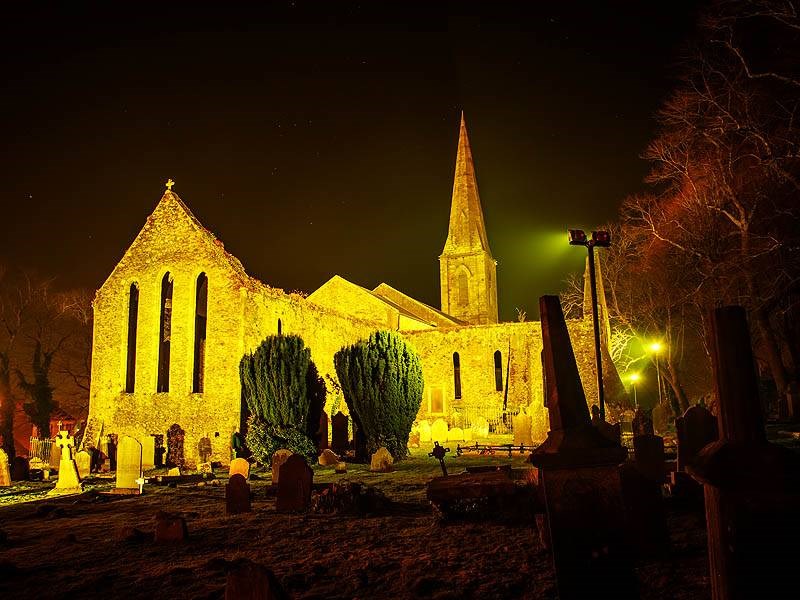 Owing to continuous technological improvement, regular components' upgrades and an ongoing product development, GRIVEN lighting fixtures constantly improve performance in terms of light output, colour rendering, luminous flux, reliability and durability. The very last versions of our Powershine MK2 S and D units in the RGBW and white light configurations have improved their luminous flux of about 30%. The wonderful pictures of this site at night perfectly show the efficiency of these luminaires, second to no other fixture of their category in the market.

The installation of the single and double bank Powershine units had to respect fixed positions and distances. Therefore, Powershine MK2 S and D in RGBW colour configuration with different optics were distributed along a perimeter set at a determined distance from the church walls, either on the ground or on poles. The final result is really striking and the vibrant intensity of the chosen colours set the whole site into a timeless atmosphere.

Gabriel Byrne, Chairman of Enlighten, says: "This was a particularly challenging project for the team involved, but nonetheless a very exciting one. With Al Read as project leader we delivered a lighting solution that is sympathetic to the history of this amazing church and respectful of its religious significance. At the same time it applies a modern colour-rendering scheme that highlights the structure’s features and presents it as a landmark building. All in all it is the perfect solution and one that sets a benchmark for projects of this nature. ”