Spain
Located in the Urola Valley (Basque Country, Spain), an idyllic setting surrounded by mountains, the Basilica at the Sanctuary of Loyola has been recently lit up in a warm shade of white by GRIVEN in cooperation with LAMP Spain.

SAINT IGNATIUS OF LOYOLA
One of the most outstanding Basque figures in history, Íñigo López de Loyola (now better known as Saint Ignatius of Loyola), was born in 1491 in his family house in Azpeitia in the Basque province of Guipuzcoa in northern Spain. Son of the Lord of Loyola, member of an important Biscayan family, Íñigo used to frequent the royal court since his childhood. As an adult, he became a controversial figure, being addicted to gambling, very contentious, and inclined to engaging in swordplay. An officer by the age of 30, he was struck by a cannon ball, which wounded him one leg and broke the other on the occasion of a battle for the defense of the fortress of Pamplona. During his long recovery, when the doctors advised that he should prepare for death, he felt called by God after reading several books on the life of Jesus and the Saints. After his conversion, he became a Catholic priest and theologian, and founded the religious order of the Society of Jesus (Jesuits).

THE SANCTUARY
The house where Saint Ignatius was born, known as the "Casa Natal”, dates back to feudal times. Resembling a medieval fortress, its walls are almost two metres thick and fitted with embrasures just like a stronghold. In 1551 the first Jesuits showed great interest in Ignatius’s birthplace. After the canonization of St. Ignatius on March 12th, 1622, the Society of Jesus promoted the preservation of the site where its founder experienced his conversion. In 1681, the Society obtained the ownership of the house and began to build, in different steps, what today is worldwide known as the Sanctuary of Loyola. Nowadays, the sanctuary is a place of pilgrimage for many devotees, who can find here at the same time the place of St Ignatio’s birth and conversion.

THE BASILICA
Designed by the Italian architect Carlo Maria Fontana, the basilica stands right in the central part of the main façade of the Sanctuary, well balancing its 150 meter long frontage. The first stone was laid on March, 28th 1689 and the building was dedicated on July, 31st 1738, feast of St. Ignatius. The whole structure, on which worked over 600 masons in the course of the years, was made up of large blocks of limestone quarried from the close Mount Izarraitz.
Enriched by columns, capitals, freizes and preceded by a wide portico decorated in the typical churrigueresque baroque style, the majestic front entrance of the basilica is crowned by an impressive 65m high dome with a diameter of 20 m. The virtues of Faith, Hope, Religion, Charity, Prudence, Justice, Fortitude and Temperance are represented at the base of the dome. Above them, there are the coats of arms of the houses of Habsburg and Bourbon, which financed the building construction.
Year
2018
Lighting design
Raffaele Vincelli, GRIVEN S.r.l.
Product specification and installation
MONTAJES ELÉCTRICOS GAU ARGI S,L
Project partner
Paulo Azkue, MONTAJES ELÉCTRICOS GAU ARGI S,L
Contractor
Society of Jesus, Santuario de Loyola
Distributor
LAMP Spain
Pictures
Aitor Rodríguez, Foto Ángel
THE ILLUMINATION OF THE BASILICA
In 2017 a new illumination system was required by the Society of Jesus for the basilica of Loyola, which wanted to restyle the layout of the basilica in view of the 500 anniversary of the Jesuits order foundation, which will be celebrated in 2021.
"During the summer of 2017 the Society of Jesus informed us about their intention to renew the existing exterior lighting of the dome of the Sanctuary of Loyola. The previous lighting was very deteriorated, there were problems of leak-tightness, the performance of the lamps was very deficient owing to their the long life, and the relevant power consumption was of course very high. We moved forward to get the necessary documentation in order to carry out the relevant lighting studio. Once we obtained all the required documents, we needed to contact a prestigious firm in the outdoor lighting sector. Our company, Montajes Eléctricos Gau Argi, as distributors of LAMP LIGHTING, with which we collaborate closely, following the instructions of Pep Cusido, Sales Director of LAMP Spain, got in touch with Marcello Balzanelli, Sales Manager of the firm GRIVEN. In a very short time we presented a dedicated lighting study to the Company of Jesus, which were enthusiastic about it and immediately confirmed us to proceed with the project” says Paulo Azkue, Project Coordinator of the installation company Montajes Eléctricos Gau Argi.

GRIVEN’s lighting designer, Raffaele Vincelli, was therefore entrusted with the preliminary study of the illumination, which had to comply with some irrevocable requirements. The luminaires had to respect the preset installation positions, in order to preserve the visual integrity of the façade. The slim columns were to be enhanced by vertical shafts in a specific tone of white, while the majestic dome had to play the lion’s share through a perfectly even light distribution. Moreover, the upper roof lantern, a daylighting architectural element providing natural light into the inner space below, along with the two side bell towers had to stand out in a warm shade of white light.

After getting from GRIVEN a detailed report with the precise aiming positions of all the required lighting fixtures, Montajes Eléctricos Gau Argi, in cooperation with our Spanish sister company Lamp, presented the lighting scheme conceived by GRIVEN to the Society of Jesus, obtaining the required authorization to proceed.

Based on the same warm white shade, the required LED lighting fixtures have been installed on three different levels: portico, dome and lantern. 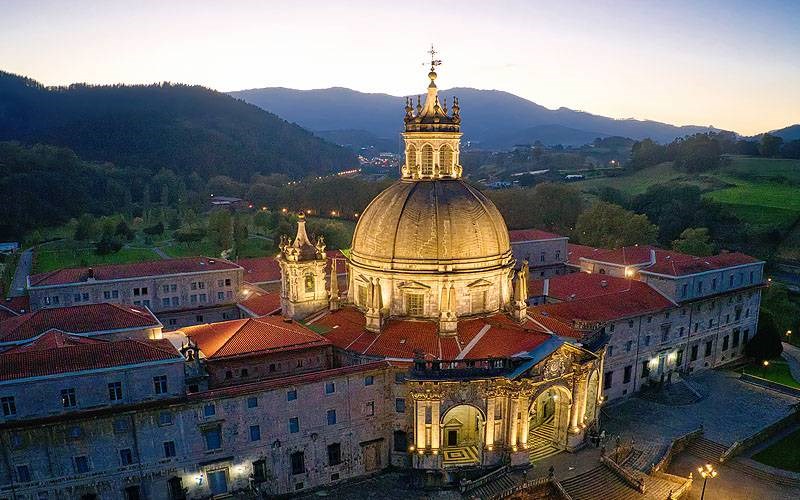 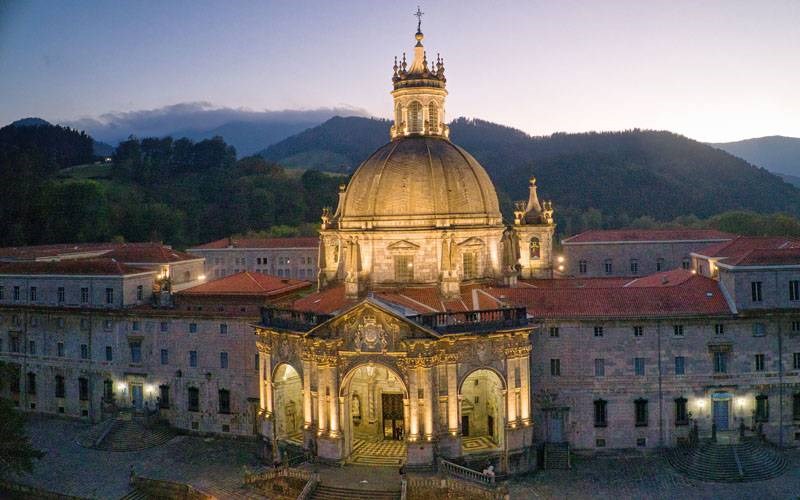 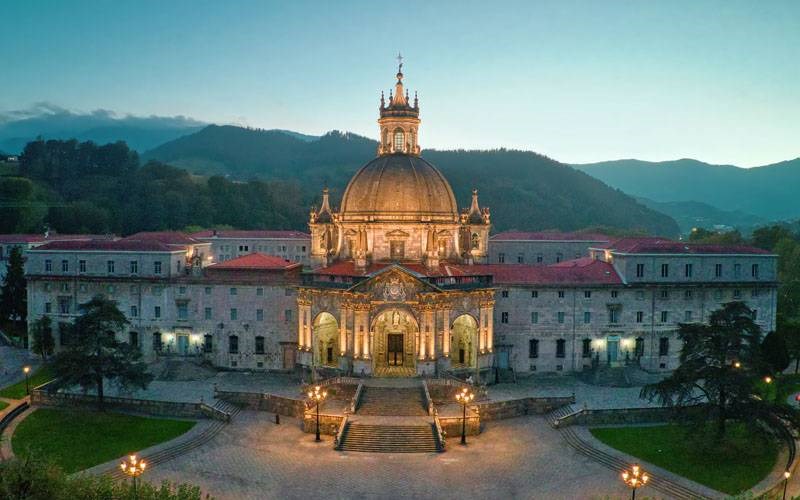 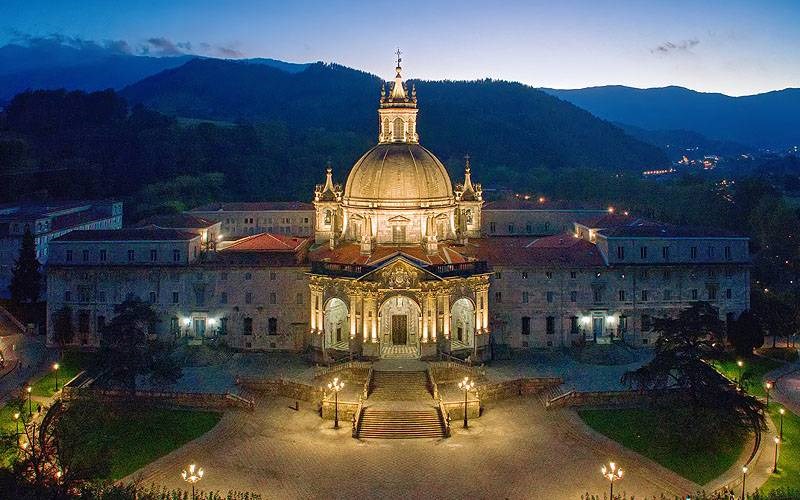 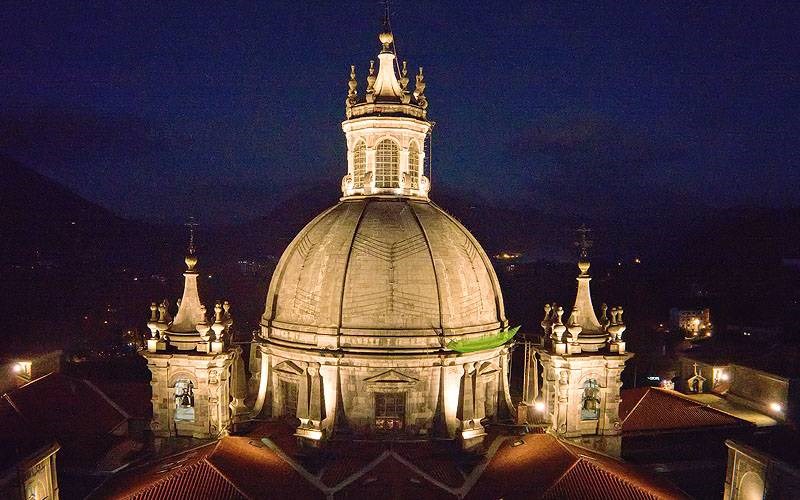 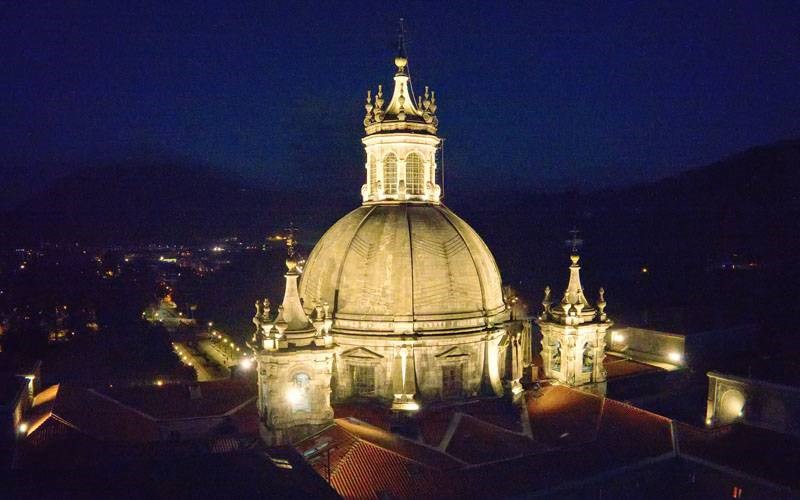 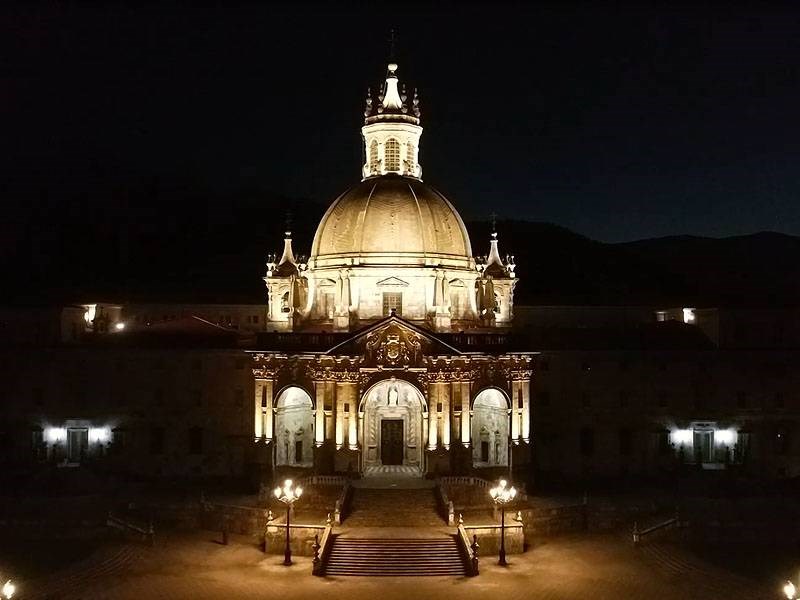 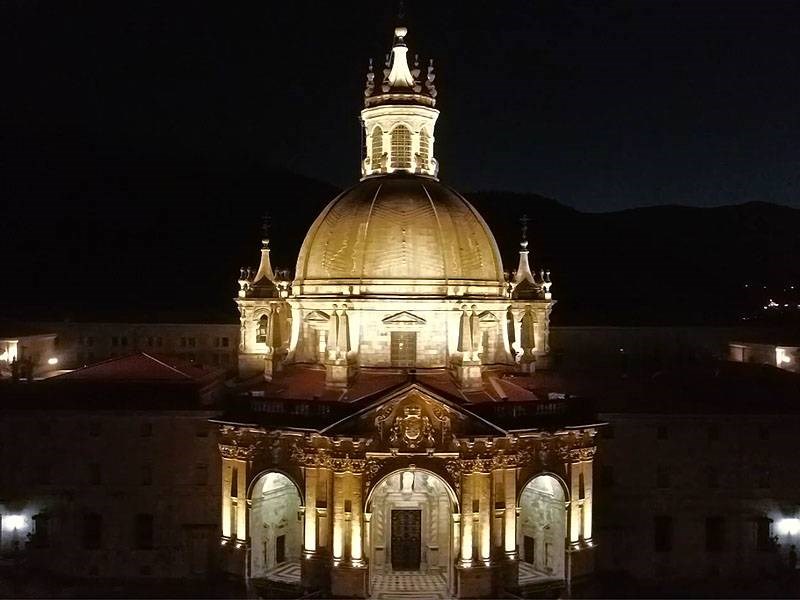 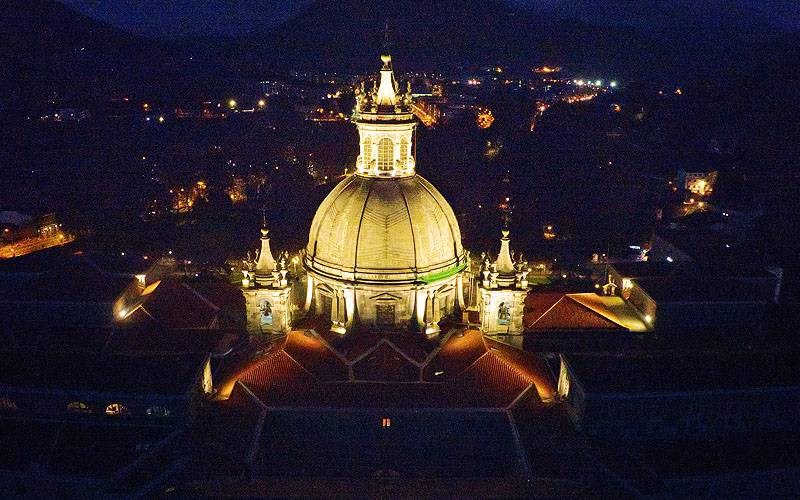 PORTICO
12 units of Jade 16 WW with narrow optics were installed at the base of the front columns of the ground floor portico in a shade of warm white that perfectly matches the existing back lighting of the decorative arcades. 2 of these units enlighten the arcade of the main gate as well as the upper coat of arms. These compact and extremely efficient surface mount solutions provide an impressive white light output, featuring a wide choice of selectable optics groups, an easy aiming orientation adjustment along with the utmost adaptability for any application purpose.

DOME
In order to reach a smooth light distribution on the whole surface of the dome, a series of Powershine MK2 S with medium or wide optics were placed along its perimeter according to a predetermined aiming scheme. 4 Powershine MK2 S with wide optics installed on the roof at the base of the dome deliver a powerful splash of light to the front part of the dome. 13 units with medium optics follow the perimeter of the dome to complete the illumination all around it. To complete the highlight of the side bell towers located at the same level of the dome, 4 units of Emerald in the same warm white colour configuration with extra wide optics were successfully mounted at the base of these turrets.

The pinnacles of the small belfries required 4 units of Jade 16 with extra wide optics each to be fully lit up. Moreover, in order to highlight the parts of the dome shaded by the decorative pinnacles surrounding the dome, more units of Jade 16 with narrow optics were placed right behind these pinnacles. The final result is really amazing as the dome is fully enhanced in its true essence, becoming really impressive also at night.

LANTERNA
Mounted on top of the dome, the small lantern, a typical element of Baroque architecture usually destined to admit light to the interior, is a proportional element in the visual design, which harmoniously complete the dome shape. 6 units of Jade 16 with narrow optics were used to highlight the six columns of the lantern, 6 Jade 16 with extra wide optics enlighten the pinnacle, while 1 more Jade 16 with narrow optics is reserved for the upper cross.

The accurate aiming of the chosen fixtures delivers an amazing light output to the whole architecture, allowing a surprising enhancement of the finest architectural details of this beautiful church, now shining in a timeless splendour. 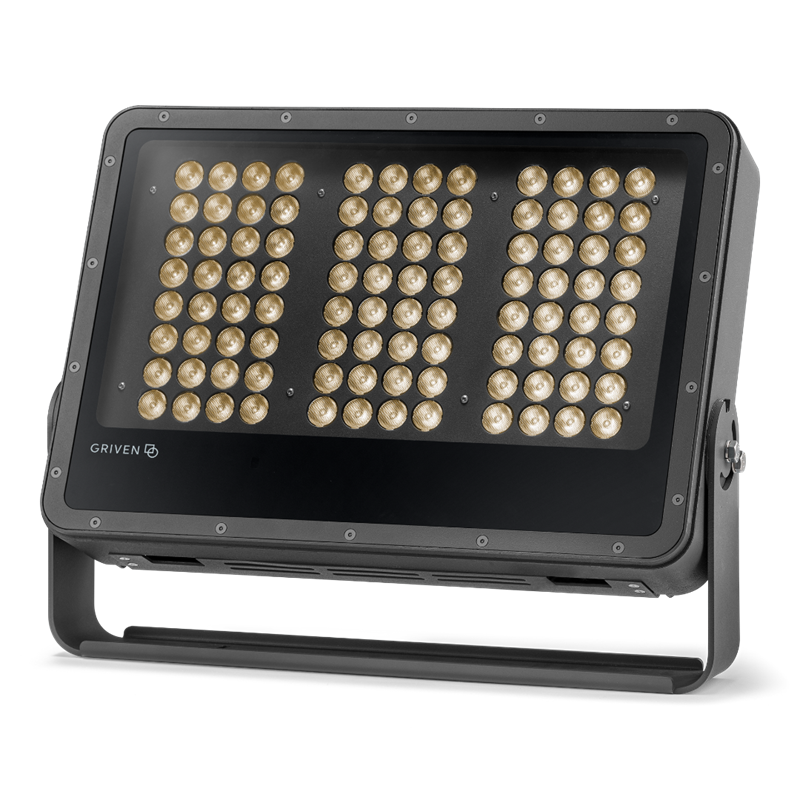 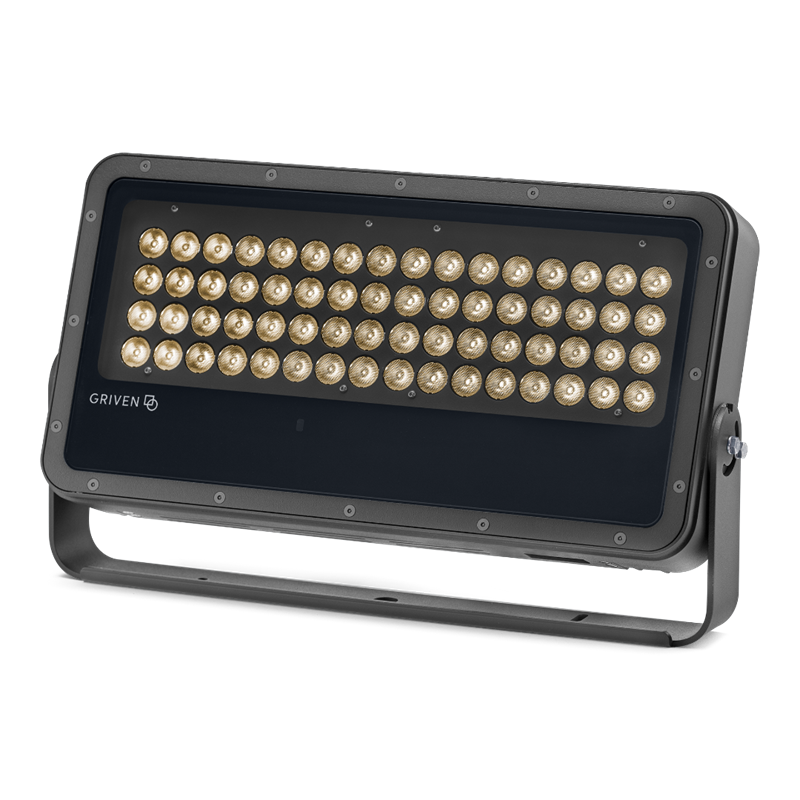 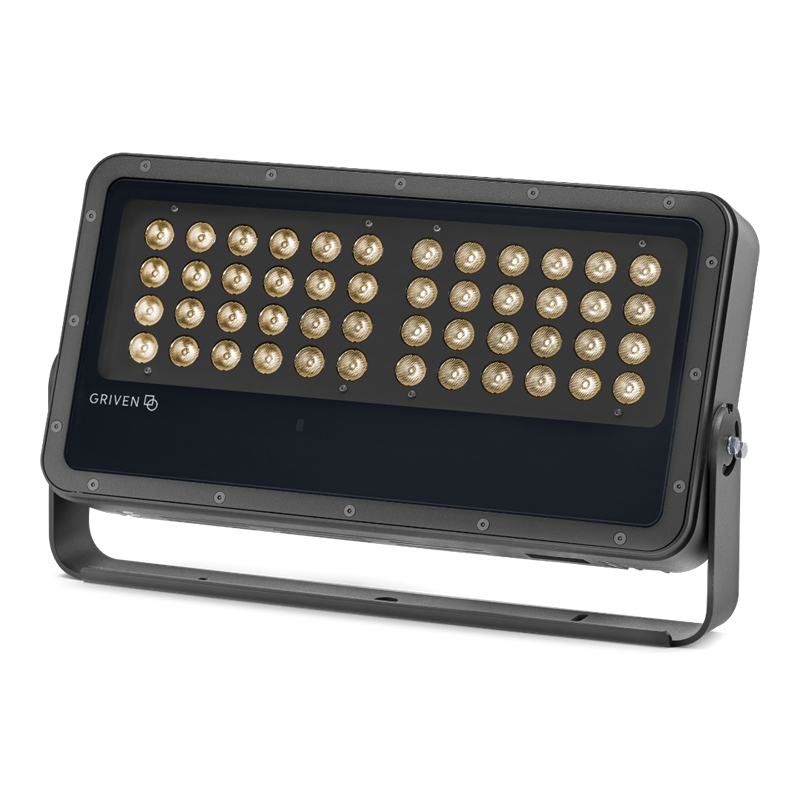 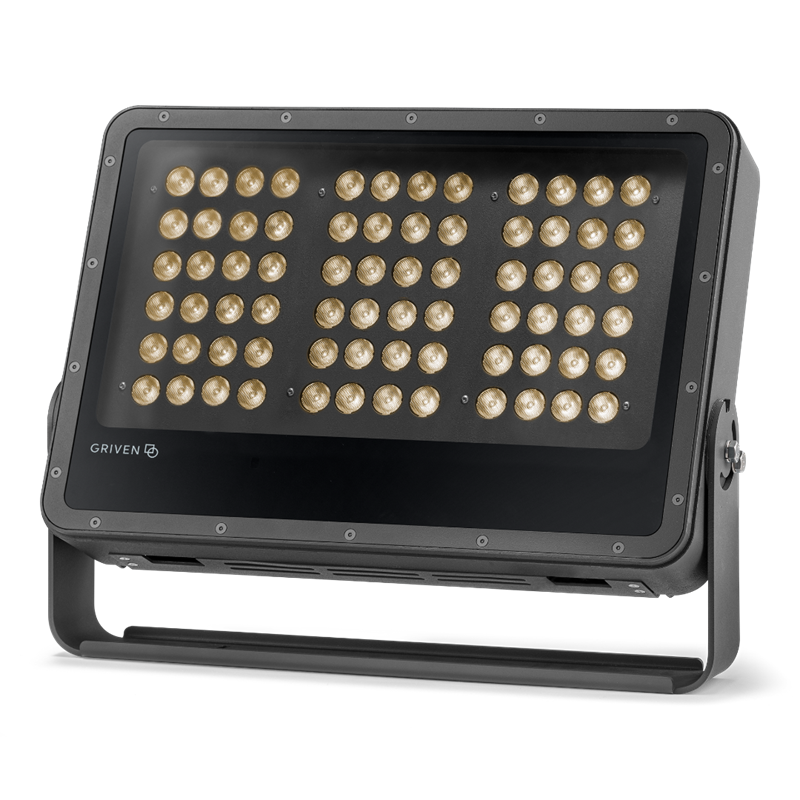