The Swarovski Crystal Worlds opened its doors in 1995 on the occasion of the 100th anniversary of the Tyrolean family company Swarovski. At the centre of this world of adventure is crystal as a raw material, with which Swarovski has been writing their success story since 1895. Subterranean chambers of wonder and rambling gardens provide space for sculptures and creative interpretations by well-known contemporary artists, creating a new way of experiencing sensations and emotions.

Nowadays the Swarovski Crystal Worlds are one of the most visited attractions in Austria with 650,000 visitors per year. Since its opening, this adventure destination has been expanded several times. After the third and largest ever expansion in 2015, the Crystal Worlds presented themselves with numerous new attractions and a redesigned arrival area, appealingly lit by Hess illuminating columns "CITY ELEMENTS”, in this case lacquered in a white aluminium shade. A total of 14 luminaires with a diameter of 230 mm and a mounting height of 4 meters provide extremely homogeneous illumination to this area, without any glare. CITY ELEMENTS is a comprehensive lighting system, which virtually answers every urban lighting need owing to its utmost flexibility and versatility. Its modular elements and options can be combined in many different ways, offering a functional system that always matches its specific architectural environment.

While the City Elements of Hess have provided an excellent functional illumination to the welcome area of the park, Griven LED fixtures have been used to highlight one of the main new attraction of the whole park, the Crystal Cloud.
Year
2016 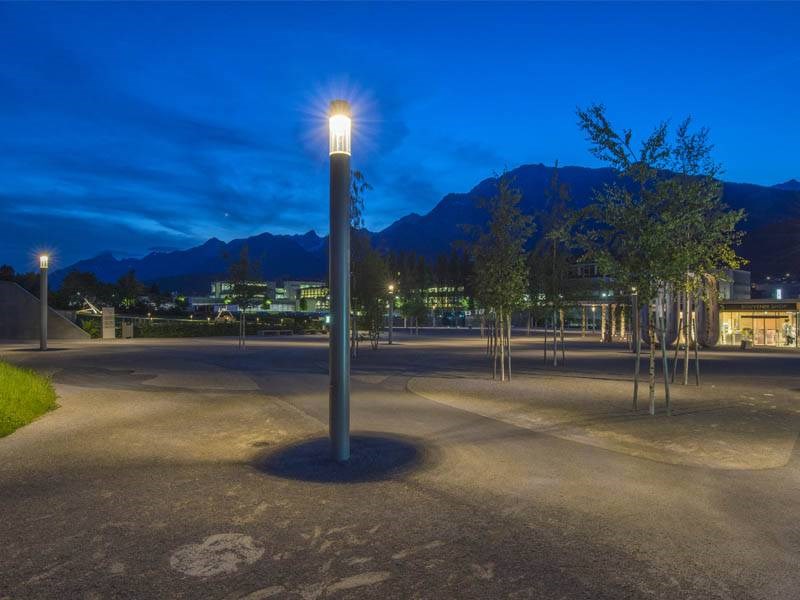 The crystal cloud: Symbiosis of landscape and art Based on their creative approach combining landscape and art into dreamscapes, the artists Andy Cao and Xavier Perrot created a spectacular cloud with 800,000 hand-set crystals as the highlight of the crystalline park landscape. The cloud area of 1,400 square meters is made up of wire meshes floating over a dark pond, which reflects the lights of the Swarowksi crystals. Owing to the constant weather and natural light changes and to the cycle of seasons, the appearance of the crystal cloud is always different, providing visitors with new and exciting impressions each time they look up at it. The Dutch design studio Theatermachine had been charged with the lighting design of several parts of this new park extension, among which the Crystal Cloud. The Theatermachine’s designers wanted to emphasize the organic shape of the Crystal Cloud highlighting the ever changing mood of the Swarowski sparkling clouds as if they were slowly drifting away like true clouds in the sky. The chosen lighting sequence of the cloud further enhances Cao|Perrot’s attempt to slow down the experience of the visitor. In fact, at set times a sudden burst of warm white light falls through the cloud hitting the pond right where hundreds of small red crystals sparkles like fireflies, reflecting their red tone on the clouds above. 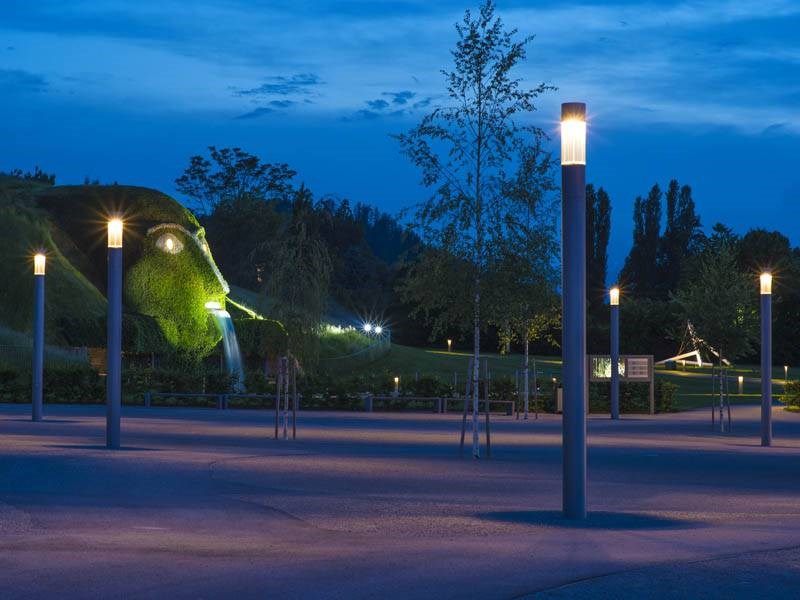 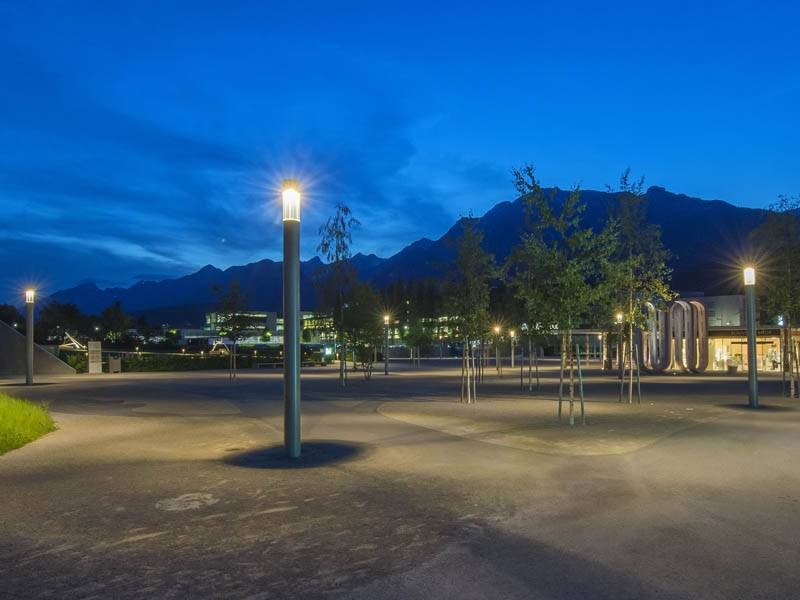 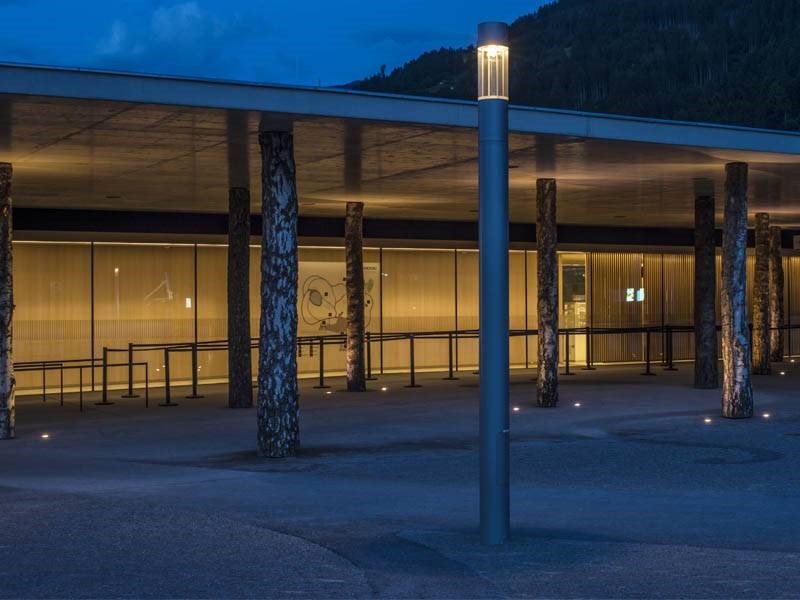 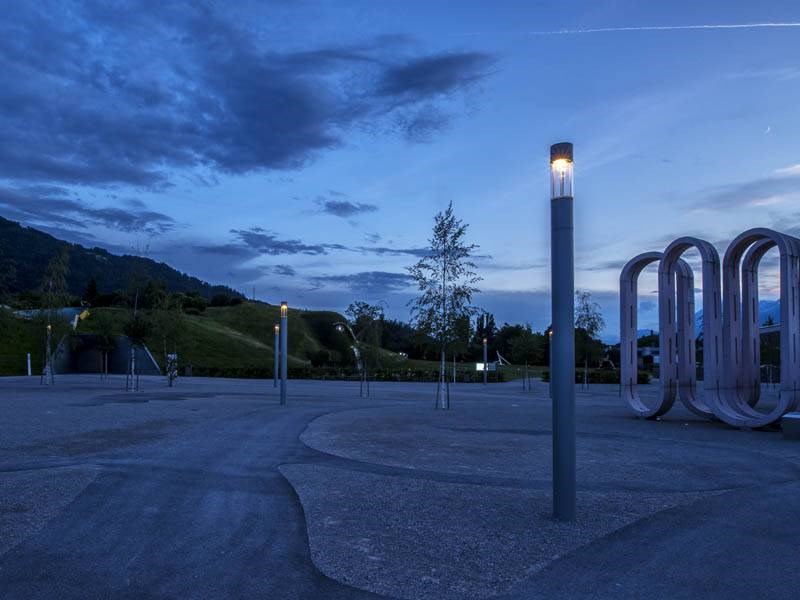 The lighting designer Floriaan Ganzevoort told us the philosophy behind his work and reported how he wanted to enhance this very special masterpiece:

"Lighting up the cloud” by Floriaan Ganzevoort:
Direction of the light:
"The direction of the light is very important for the way we perceive form. Up-light is used to penetrate all parts of the cloud and to achieve a contrast between soft, even lighting on one hand and a more dramatic lighting on the other hand. By using more than fifty up-lighters we were able to create a kind of lighting animation. We used sidelight on each individual cloud as a ‘key-light’. In this way we enhanced both depth and form. Sidelight was placed from the corners inward.”

Colour of the light:
"We wanted to use cold, white light to recalls a full moon atmosphere. We specified GRIVEN RGBW LED fixtures to create the pale pastel shades that we were looking for. It was important to have the same RGBW colour configuration for both the in-ground fixtures and the up-lighters located on the supporting poles of the cloud in order to match the colour output. By using LED fixtures the refraction of the light in the crystals doesn’t produce the usual rainbow effect, bringing out the full potential of the sparkle in the Swarovsky crystals. For this we used warm white dimmable LED fixtures with a very high colour rendering.”

Sequence of the light:
"The sequence chosen for the Crystal Cloud is not static, although it might appear so at a first glance. Like the light continuously changes during the day, so in the evening the visitor experiences an autonomous movement of the lighting. This is virtually created by a sequence that suggests that the clouds are moving slowly westwards. The lighting sequences together with the artwork of CAO|Perrot changes your perception of time, as if time would slow down. This drifting is interrupted every 15 minutes by a sudden movement which cuts through the cloud with a strong beam of warm light that wakes it up from its slow movement. At this point all the crystals break the light down into small rainbows. A visual ‘reflection’ of the fireflies from the pond becomes visible in the cloud for a very short moment (in the form of many very small red lights) and then everything fades back to normality.”

An array of Dawn MK2 and Dune MK2 in RGBW colour configuration were used to complete this artwork, witnessing the capability of the Nordeon Group to act as a one-stop-shop and to offer a wide range of ultimate lighting solutions.

About Theatermachine:
In 2008 lighting designers Floriaan Ganzevoort and Maarten Warmerdam founded the Theatermachine. This partnership provides an environment in which light is not only considered in an analytical way but in which light is seen as an important carrier of meaning within a project. The projects they do are not just theatre projects, but their work extends to music, public spaces, architecture as well as light as an independent art form. Some of their recent projects: Jüdisches Museum Berlin, Stedelijk Museum Amsterdam (museums), Amsterdam Light Festival, Luminale Frankfurt (light art), Saskia Boddeke and Peter Greenaway, Guy Cassiers, Theater Basel (opera/theatre), Revival Hembrug Zaandam, Tolhuistuin Amsterdam (architecture).